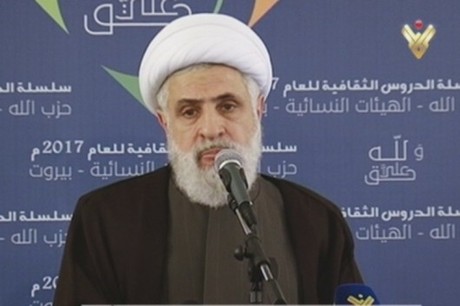 Hizbullah deputy chief Sheikh Naim Qassem on Friday said that his party “backs the resumption of the Lebanese government’s meetings.”

He, however, added that the government should only meet after “addressing the reasons that led to the meetings’ suspension.”

A political dispute over the conduct of port blast investigator Judge Tarek Bitar has paralyzed the government since October 14, with Hizbullah and the Amal Movement pushing for his removal.

Turning to the judicial developments, Qassem said “the judicial scene in Lebanon is unhealthy.”

“It’s not related to an incident nor to a judge. It has to do with a full judicial system that is intertwining in an unusual way,” Hizbullah number two said.

“There must be a reevaluation and a solution, or else the judicial situation will remain unhealthy,” he warned.

The judicial is unhealthy because you temper with it!

The face of the Iranian occupation of Lebanon.

So, kizb used to brag how it controlled the airport, ports of entry AND the port of Beirut. Now, when something LITERALLY blows up in their faces, they scramble around tried to evade responsibility. Nasrallah made speeches---went nowhere. They tried a 'demonstration' in front of the Justice ministry--that went even further nowhere. They stopped ministry meetings---country is in bad condition, do they actually think that will play well to the masses, and finally bringing out a 'religious' figure--how desperate are they now.

If they want to claim things like having control of the ports, let them live with the consequences. Right now, they are on even thinner ice.