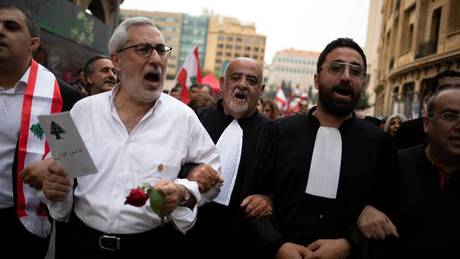 The Beirut Bar Association elected a new head Sunday in a vote that saw major losses for opposition candidates and big wins for representatives of the country's ruling elite.

Nader Gaspard was chosen to replace Melhem Khalaf, an independent candidate whose election two years ago was widely hailed as a victory for a 2019 protest movement demanding a political overhaul.

Gaspard ran as an independent candidate but is backed by several of the country's top political parties, according to local media reports.

For many, his victory marks a win for the country's ruling class, just months away from Lebanon's first parliamentary polls since 2018.

Lawyers backed by the country's opposition groups also failed to clinch a single seat on the association's nine-member council.

Under Khalaf's leadership, the Beirut Bar Association was instrumental in supporting opposition activists demanding an end to endemic corruption and nepotism that led to the country's worst-ever financial crash.

It also collected and processed hundreds of criminal complaints from the victims of last year's deadly blast at the Beirut port, in an effort to press for accountability from the state.

Many in Lebanon will be wondering whether Sunday's vote could foreshadow similar gains for established political parties in legislative polls scheduled for March.

The vote will mark Lebanon's first major electoral test since the onset of its financial collapse in 2019.

It comes as Lebanese, nearly 80 percent of whom live below the poverty line, battle to survive with scant incomes and endless power cuts and price hikes.

This is a wake up call to Thawra. People and lawyers felt Khalaf was a lot of theatrical postures but little actions in making lawyer and people life better. Same view of Thawra. Lebanon has the best potential of any country in the region. We had 6% GNP growth in 2006 before Hizb started a war to protect arms and duo Shiaa blocked government for months to stop Hariri court systematically destroying Beirut and Lebanon. No country occupied by a militia has any chance of survival. Gebran Sons predicted the path to hell in 2006. Local and foreign investment are impossible when occupied, and democracy and freedom cannot coexist with Basij arms and Useful Idiot Aoun. Today, unless HizhIran is totally disarmed, Lebanon has no hope. Thawra should prioritize objectives and join force with all seeking sovereignty and neutrality first. Otherwise, they will divide votes and become another Useful Idiot wasting this historical opportunity to the delight of HizbIran

Regardless of lawyer elections, in these exceptional days and incredible injustice by one militia terrorizing an entire nation, average Lebanese wonder considering all available evidence from Nassrallah himself and Iranian Junta that Hizbolaah arms and funding are coming from Iran and the evidences off all Hizbollah crimes from Rafiq Hariri, Port, Tayoune, and others; why there have been no legal action against the Iranian Junta in US and European courts to compensate dual passport Lebanese victims of Hizbollah crimes from Iranian funds frozen in the West. We frankly have lost confidence in Lebanese lawyers and ability to make any change to restore Lebanon sovereignty when our ship is sinking in front of our eyes and our freedom, democracy and justice are hostage to one criminal militia.

"There is more power in unity, than in division"

A lesson to be learned thawra!

anyone who expect that positive change is coming to Lebanon is a dummy, Lebanon will always be ruled by the feudal war lords most Lebanese are loyal to their za3im and not their country

That is true mostafa. But 250.000 expats voting from abroad are a game changer.