IAEA Chief Says He 'Could Not Agree' in Talks with Iran 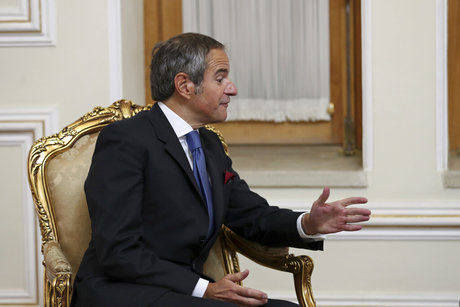 The U.N. nuclear watchdog's head said on Wednesday that he "could not agree" in talks with Iranian officials to resolve disputes over the monitoring of the country's atomic program, a day after returning from Tehran.

Rafael Grossi, director general of the International Atomic Energy Agency (IAEA), told the quarterly meeting of the board of governors that his talks in Tehran were "inconclusive," despite what he had earlier described as "intense" negotiations.

"We could not agree yesterday, in spite of my best efforts," Grossi told reporters on Wednesday, shortly after addressing the board meeting.

Among other officials in Tehran, he met Mohammad Eslami, the head of the Atomic Energy Organization of Iran.

He had been hoping to make progress on several points of contention between the agency and Tehran.

These include the constraints put on IAEA inspections activity earlier this year, outstanding questions over the presence of undeclared nuclear material at sites in Iran, and the  treatment of IAEA staff in the country.

The talks came ahead of the scheduled resumption on Monday of negotiations between Tehran and world powers aimed at reviving the 2015 deal that gave Iran sanctions relief in return for curbs on its nuclear program.

There is no doubt Iran is getting the bomb. Suddenly to realize this nuclear nirvana will make Iran less secure, even more isolated and hated by the world community. A hallow achievement as neighboring countries will be quickly offered nuclear know-how by the West. Iran path is another North Korea in the region at the cost of oppressing Iranians and its satellites. Children dying from hunger in Yemen and soon Lebanon whereas Iranian militias in these countries armed to the teeth with advanced rockets spreading poverty and radicalism. The Kiss of Suleimani is Satan Kiss for every country and people he occupied.

Comments show up after a long while on Waterfox. I even refreshed the page and the comment(s) still didn't appear. I came over here to Chrome and here it was, here they were.

Interesting! What else is new?