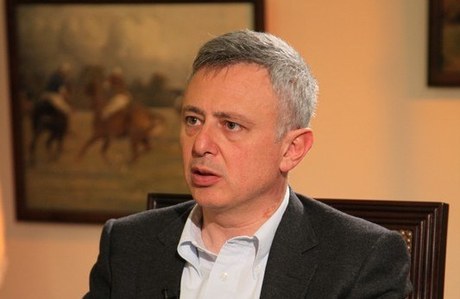 Marada Movement chief Suleiman Franjieh on Sunday announced that his party will not name a successor for Information Minister George Kordahi, who resigned on Friday over a diplomatic crisis with the Gulf states.

"With our respect and love for all the names that have been raised in the press, our stance that we expressed in Bkirki about not naming a successor to ex-minister George Kordahi has not and will not change," Franjieh tweeted.

Kordahi stepped down Friday in a move he said could open the way for easing an unprecedented diplomatic row with Saudi Arabia and other Gulf Arab nations that has compounded Lebanon's multiple crises.

The resigned minister had criticized the Saudi-led military intervention in Yemen during an interview which was recorded before he became minister but was aired after he joined the Cabinet.

His comments angered Saudi Arabia as well as Kuwait, Bahrain and the UAE, which responded by recalling their ambassadors from Beirut.

Saudi Arabia also blocked imports and Kuwait said it would limit visas issued to Lebanese, prompting fears that a Gulf backlash could endanger the interests of millions of expatriates living in Arab states of the oil-rich Gulf.

The standoff marked a fresh blow for Lebanon, whose government was only formed in September after a 13-month deadlock.

It doesn't seem Franjieh got the memo. Anyone praising the criminal regimes of Iran and Assad is a traitor by any definition. Anyone calling HizbIran and its Iranian arms and doctrines a Lebanese resistance, must have his head examined. HizbIran is Suleimani occupation force, a kiss of death of every Arab Shiite community he conquered. Hizbollah is a criminal organization that assassinated Lebanon's best, surviving by intimidation and buying loyalties (100,000 militant), amassing riches from drug trades, illegal crossings, money laundering while Lebanese live in misery. A day soon will come where Hizbollah leaders and their Iranian handlers will be brought to international justice by their victims for reparations in the billions from Iran frozen funds. Thawra lawyers, start preparing your cases to bring down thsi criminal organization.

What about the rest of Lebanon that sees March 14 as lackeys of Israel?

"prompting fears that a Gulf backlash could endanger the interests of millions of expatriates living in Arab states of the oil-rich Gulf."....There are 377,000 Lebanese living in the Gulf which Includes Qatar and Oman...not millions!

Thank you Suleiman Franjjieh for your contribution for the good of Lebanon. By refusing to name a Marada minister you have saved us further embarrasment and misery.

The perfume maker was the top of the elite in Frangie's book. His only literate man. He has no replacement capable to equal that.