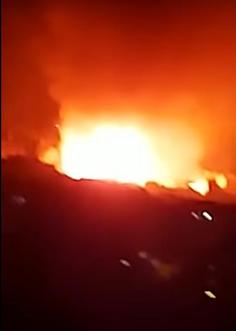 Ambulances rushed to the scene as initial reports said a fire had started in a diesel tanker and spread to a nearby mosque controlled by Hamas. The fire triggered explosions of weapons that were stored inside the mosque, residents said.

The NNA said the army cordoned off the area, preventing people from entering or leaving the camp. The blasts were heard across the city of Tyre and the neighboring towns.

South Attorney General Judge Rahif Ramadan meanwhile tasked security agencies and bomb technicians with inspecting the depot as a probe was launched into the incident to unveil its circumstances, the agency added.

Lebanon is home to tens of thousands of Palestinians refugees and their decedents. Many live in the 12 refugee camps that are scattered around the small country.

It’s now more than ever time to tackle the illegal arms file.

Are these weapons for liberating Palestine?

Lebanon is a haven for terror groups. Anyone come in and set up camp. No one will ask. you do as you please.

Nothing has damaged whatever was of Lebanon more than the "Palestinian" Cause. Yet al other arab countries are flourishing. Lebanon is just cursed.