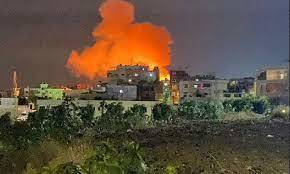 The Palestinian Hamas group said Saturday that explosions that shook a refugee camp in southern Lebanon were caused by an electrical short-circuit in a storage area for oxygen bottles used to treat coronavirus patients.

Later in the day however, a Lebanese security official said that the explosion in the camp was clearly ammunition -- not oxygen bottles. The official, who spoke on condition of anonymity in line with regulations, did not elaborate.

Lebanon's state-run National News Agency had reported that arms stored for Hamas exploded Friday in the al-Burj al-Shamali camp, killing and injuring a number of people. A security official also said the explosions caused casualties but did not give a breakdown.

Hamas in a statement Saturday described the explosions as an "incident" adding that a fire in the refugee camp in the southern port city of Tyre caused limited damage. It gave no word on casualties but residents in the camp said at least one person was killed.

Hamas said the oxygen bottles and containers of detergents stored at the camp were to be distributed as part of its aid work in the camp.

"Hamas condemns the misleading media campaign and the spread of false news that accompanied the incident," the militant group said in its statement. It added that reports about the cause of the blast and the "deaths of dozens" are baseless.

Immediately after the blasts, Lebanese troops deployed around the camp and briefly prevented people from entering or leaving.

NNA said the state prosecutor in southern Lebanon has asked security agencies and arms experts to inspect the Hamas "arms storage" site inside the camp.

Lebanon is home to tens of thousands of Palestinian refugees and their descendants. Many live in the 12 refugee camps that are scattered around the small Mediterranean country.

I swear this country is cursed. port blast, now camp blast. Oxygen bottle my ass. This country or whatever is left of it is a haven for islamists Militias, terror groups (in all their forms and religions), mafia, you name it. come on in and set up camp.

The explosion was due to oxygen bottles, my father is the Pope and my grandmother was mother Theresa…. Oh and I forgot, Hezbollah is a Resistance! Haha