Deal or No Deal? Parties Say 'No Bargain' as Berri, Miqati Deny 'Dispute' 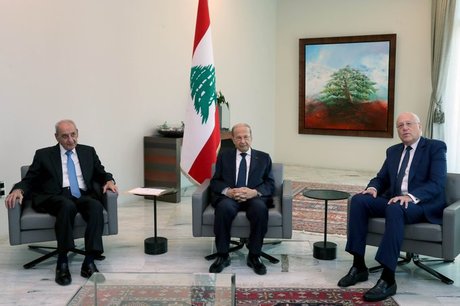 Parliament Speaker Nabih Berri said that his relation with Prime Minister Najib Miqati is good, rejecting what has been said about a possible argument between the two, after Miqati was seen leaving angry Monday from a meeting with Berri.

Miqati’s circles have also negated the “alleged dispute,” stressing that the relation between Berri and Miqati is good.

The Prime Minister’s circles have told al-Joumhouria newspaper, in remarks published Tuesday, that the meeting between Berri and Miqati was “positive” and that they will proceed with the consultations.

Monday witnessed a lot of suspense in the political scene, as Miqati also announced on Monday evening that he won’t resign, after al-Jadeed TV said then negated that he had rejected a proposed "settlement" and that he intends to "resign."

MTV had earlier reported that Hizbullah had mediated a deal between President Michel Aoun and Berri that would entail preventing Judge Tarek Bitar from interrogating ex-ministers, and in return securing the approval of the appeal against the electoral law's amendments by the Constitutional Council.

Berri, in a press interview, negated the bargain. “I have no knowledge of any deal at all, nor does Miqati, who was very unpleased with what was reported."

Berri added that he would support and abide to any decision by the Constitutional Council, which is expected to decide today, Tuesday, whether to approve or reject the appeal filed last week by the Strong Lebanon Bloc.

Hizbullah and Aoun's camp had reportedly negated the deal as well.