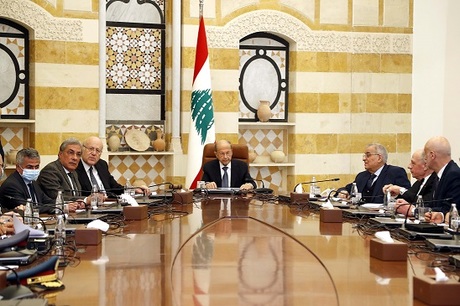 President Michel Aoun on Wednesday said the boycott of Cabinet sessions by Hizbullah and the Amal Movement is “unacceptable,” noting that any objections should be addressed through institutions.

“Cabinet must convene and I’m not obliged to alone sign any resolution,” Aoun said at a Higher Defense Council meeting.

“No signature can replace Cabinet amid the presence of a government enjoying full constitutional powers,” the President added.

Prime Minister Najib Miqati for his part said that, “like the president,” he is “keen on Cabinet’s meetings,” but warned that “those in charge of this country are obliged to work on reconciling viewpoints instead of worsening the rift.”

“There is fear that calling for a Cabinet session would lead to a rift which we must cooperate to avoid,” he added.

“We’re all negatively affected by its failure to convene and we hope to be soon able to call for a meeting aimed at addressing the urgent issues,” Miqati went on to say.

Since 2005 Aoun, with his allies in Hizbullah and Amal, squandered a total of nine years with closing of parliament, boycotting cabinet, time wasting, etc, to allow him to become president and his son in law a minister. He's pissed now because he was not able to rob the expats of their votes and because his allies are engaging in the same tactics he and they had been engaged in since he came back from exile in France.

If President Aoun really believes what he says regarding the boycott by Hizballah as "unacceptable", then why doesn't he just tell PM Miqati to hold cabinet meetings and any decisions reached will be confirmed by him?

What’s the problem? Just have the meetings without the cancer of kizb & amal. What a country.. the worst, the better