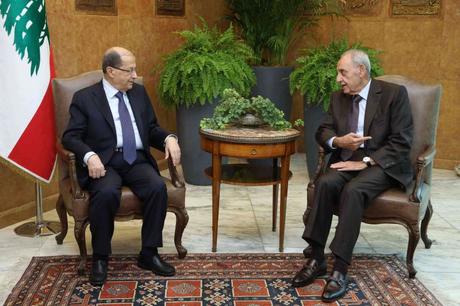 Finance Minister Youssef Khalil, as per Speaker Nabih Berri’s directives, did not sign the promotions of officers of the 1994 batch in the army, known as the “Aoun session,” sources said.

Official sources confirmed Wednesday to al-Liwaa newspaper what MTV had reported on Tuesday about the minister signing all promotions of the year 1994 in all other security agencies except those of the army officers.

The promotions were referred to the Premiership then to the Presidency for approval.

Aoun will not sign the decrees promoting colonels to brigadier generals, the sources said, in response to the exclusion of the 1994 batch army officers “who are eligible based on seniority.”

So, you now admit that the Speaker of Parliament, who in any normal country would be number 3 after the President and the Prime Minister, is actually the one controlling Lebanon. What a sad situation.

not only would be number 3, but would also adhere exclusively to Parliament business, not giving orders to anyone, least of all ministers, and not acting as a party chief during Speaker’s mandate