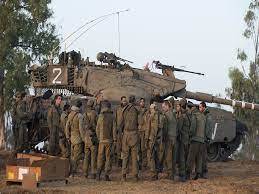 Israeli tanks fired on suspects along the Syrian border in the Golan Heights after they were detected near Israeli forces, the Israeli military said.

"A short time ago during army activity in the Golan Heights, soldiers identified suspects close to a military position and fired in their direction from tanks," the army said in a brief statement.

"The suspects then moved away into Syrian territory," it added.

In the 1967 Six-Day War, Israel seized part of the strategic Golan Heights -- bordered by Lebanon, which patrols there -- from Syria.

The official Syrian news agency SANA said Israeli forces had also "attacked with tank shells the forests of Al-Hurriyah village" in the Syrian province of Quneitra, which borders the Israeli-occupied section of Golan Heights.

SANA added that Israeli helicopters and reconnaissance planes also flew over the area.

The Syrian Observatory for Human Rights, a UK-based monitor, said a fire broke out in the forest near the village and that there had been Israeli helicopters present, but did not mention casualties.

Israel considers this part area of southern Syria to be a "second front" of Hizbullah, which is backed by Israel's arch-foe Iran.

Since 2011 and the outbreak of Syria's civil war, Israel has carried out hundreds of air strikes on Syrian territory, targeting government positions as well as allied Iran-backed forces and Hizbullah fighters.

Israel says it is trying to prevent Iran, one of Damascus' key allies in the decade-old civil conflict, from gaining a permanent military foothold on its doorstep.

On Tuesday, the Israeli army said it had shot down a small Hizbullah observation drone flown over the heavily guarded Israel-Lebanon border.