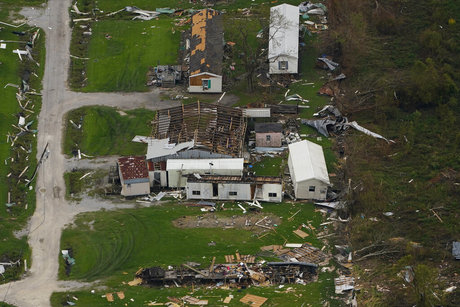 Damage wrought by Hurricane Ida in the U.S. state of Louisiana and the flash floods that hit Europe last summer helped make 2021 one of the most expensive years for natural disasters, reinsurance company Munich Re said Monday.

The company's annual report put the overall economic losses from natural disasters worldwide last year at $280 billion, making it the fourth-costliest after 2011, the year a massive earthquake and tsunami struck Japan.

Insured losses in 2021 amounted to $120 billion, the second-highest after 2017, when hurricanes Harvey, Irma and Maria hit the Americas, according to Munich Re.

More than a third of those insured losses last year were caused by Ida ($36 billion) and the floods in western Germany, Belgium and the Netherlands ($13 billion).

The company warned that studies showed a link between global warming and natural disasters.

"The images of natural disasters in 2021 are disturbing," said Torsten Jeworrek, a member Munich Re's board of management.