Sisi Voices 'Full Solidarity' with Lebanon in Talks with Miqati 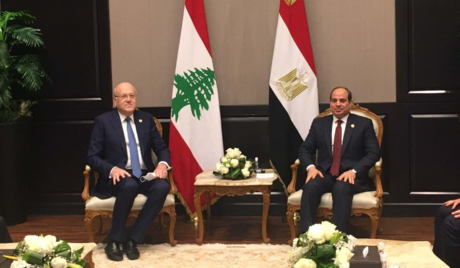 Al-Sisi also voiced Egypt’s “readiness to contribute to delivering the Egyptian gas” to Lebanon “according to the signed treaties,” giving instructions to “facilitate the issue and speed up its implementation.”

“Lebanon is in my heart personally and in the conscience of Egypt,” al-Sisi added.

The meeting between al-Sisi and Miqati was held on the sidelines of the World Youth Forum.

He also called on Egypt to “sponsor the process of general Arab revival.”

The meeting tackled "the issue of importing Egyptian gas to Lebanon and it was agreed to sign the preliminary agreement between Lebanon, Egypt, Jordan and Syria soon, to pave the way for obtaining a final exemption from the sanctions of the Caesar Act," Lebanon's National News Agency said.

Madbouli also told Miqati that Egypt will "prepare a quantity of medical and food aid to send it to Lebanon by sea" as the two sides agreed on "addressing some issues related to exporting agricultural products to Egypt."