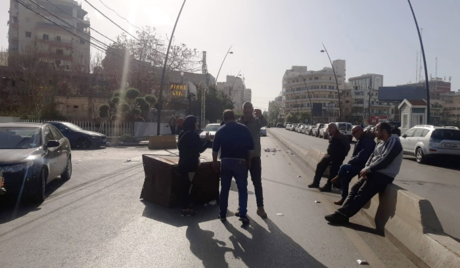 Lebanon’s national currency, which has been witnessing a free fall in recent days, was trading for LBP 33,200 against the dollar at around 2:00 pm Tuesday, after having reached a historic low of 33,600 earlier in the day.

The crash has sparked a fresh wave of road-blocking protests across the country.

In the North, protesters blocked the al-Nour Square in Tripoli and the road outside Halba’s serail in Akkar. Protesters also blocked roads in downtown Beirut, the Zouk highway, roads in Sidon and the South and the Jeb Jannine road in the Bekaa.

In Sidon, near the al-Zaatari Mosque, angry protesters blocked the road with trash bins and called on all citizens to “take to the streets and exert pressures in order to find solutions for the successive crises.”

The Halba protesters meanwhile denounced the dire situations and the lira crash, demanding their “right to have electricity and all living requirements in the Akkar province, like the rest of Lebanese towns." They also slammed corruption amid tight measures by the Internal Security Forces.

Lebanon, a country of around six million people, is like a sinking ship, grappling with an unprecedented financial crisis that the World Bank says is on a scale usually associated with wars.

The currency has crashed, people's purchasing power has plummeted and the monthly minimum wage is now worth $22.