Iran Says only 12 Asiatic Cheetahs Left in the Country 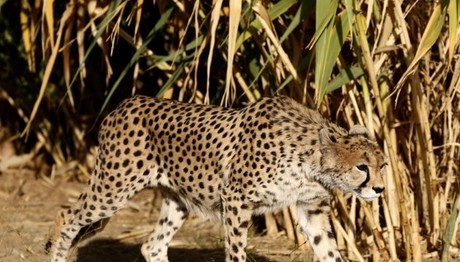 Iran is now home to only a dozen Asiatic cheetahs, the deputy environment minister has said, describing the situation for the endangered species as "extremely critical".

"The measures we have taken to increase protection, reproduction, and the installation of road signs have not been enough to save this species," Hassan Akbari told Tasnim the news agency.

"There are currently only nine males and three females against 100 in 2010 and their situation is extremely critical," he added.

His ministry said the animals had been victims of drought, hunters and car accidents, especially in the country's central desert where the last of them live.

The world's fastest land animal, capable of reaching speeds of 120 kilometers (74 miles) per hour, cheetahs once stalked habitats from the eastern reaches of India to the Atlantic coast of Senegal and beyond.

They are still found in parts of southern Africa, but have practically disappeared from North Africa and Asia.

The subspecies "Acinonyx jubatus venaticus", commonly known as the Asiatic cheetah, is critically endangered, according to the International Union for Conservation of Nature.

Iran, one of the last countries in the world where the animals live in the wild, began a United Nations-supported protection program in 2001.

In 2014, the national football team emblazoned an image of the cheetah on its jerseys for the World Cup tournament.