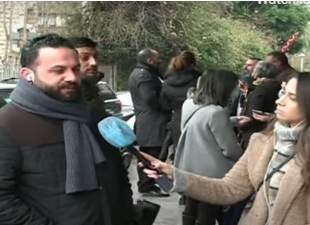 Protesters and activists on Wednesday staged a sit-in outside the Justice Palace in Beirut in solidarity with a jailed man who took hostages Tuesday at a Bekaa bank and forced employees to give him $50,000 in cash from his own account.

The man, Abdallah al-Sahi, had turned himself in to security forces after obtaining the money. Bekaa prosecutor Judge Munif Barakat later issued a decision ordering the confiscation of the $50,000.

Al-Sahi announced a hunger strike on Wednesday according to media reports.

As al-Sahi’s move won praise on social media, the head of the depositors association, Hassan Mughniyyeh, accused the judiciary of collusion with the banks.

“We won’t allow that Abdallah al-Sahi be persecuted,” Mughniyeh added, revealing that he had called the man’s sister and agreed with her that the sum of money “would not be handed over no matter what happens.”

The Association of Banks in Lebanon meanwhile condemned “the repeated attacks that have recently targeted a number of branches, endangering employees’ lives.”

In a statement, the Association condemned “all forms of violence,” warning that “attempted murder or even threatening to burn employees alive are acts that cannot be justified nor accepted under any circumstances.”

“The recovery of deposits has one path: a comprehensive recovery plan that would revive the country through which the state would preserve depositors’ money,” ABL added.

This guy should be prosecuted, fined, and jailed. If I am one of those employees at the bank as well, I will file a civil lawsuit against him for taking me hostage, psychological distress and health issues caused by the trauma.

To those who are sorting the hostage taker, you're pieces of shit.

You want your money fine, I do to and so is everyone else. But it's your government who stole and squandered all your money by borrowing it from the banks for supposedly government infrastructure, electricity, water, roads, housing, social services, health, etc... but they all pocketed the money, Are the banks guilty, sure, but you don't take hostages to demand they give your money. What a sick society we have become.

You’re wrong, it isn’t the government who squandered our money, it’s the banks who loaned it to the central bank knowing it was going down the drain. In fact, I’m pretty certain that not all the money was spent , the ruling class just helped itself in our savings.

I back the hostage taker and I think it should be taken to the next level. Banks must either sell their assets to partially refund the depositors or they must offer an acceptable alternative, like owning a share of the assets. … if they don’t, they should be torched.