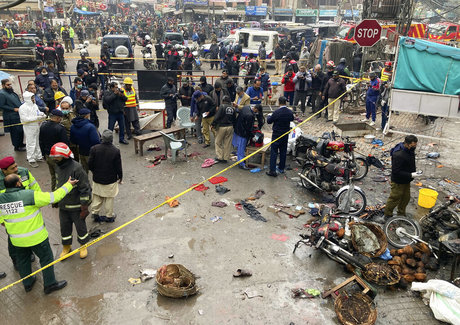 The blast was so powerful that it damaged several shops at the famous Anarkali bazar, two witnesses, Mohammad Hafeez and Abdul Majeed, told reporters. Video footage from the scene showed burning motorcycles and victims crying out for help. The killed and wounded included passers-by, shoppers or local store owners.

According to Abid Khan, a senior police official, some of the wounded were listed as being in critical condition and there were fears the death toll could climb further.

Police were still trying to determine what kind of device was used in the attack, Khan added. An investigation was underway.

Hours after the attack, the newly formed Baluchistan Nationalist Army said it was behind the bombing. The group was established earlier this month, when two minor separatist groups — the Baluchistan Republican Army and the United Baluch Army — merged and appointed Mureed Baloch as their spokesman.

Baloch claimed responsibility for the Lahore attack in a posting on Twitter. He did not reveal the motives for the attack, saying only that a statement will be issued later.

Pakistan's Prime Minister Imran Khan condemned the bombing and in a statement urged local authorities to provide the best possible medical facilities for the wounded.

Baluchistan has been the scene of a long-running insurgency in Pakistan, with an array of separatist groups staging attacks, mainly on security forces. The separatists have been demanding independence from the central government in Islamabad. Although Pakistani authorities say they have quelled the insurgency, violence in Baluchistan has persisted.

Pakistan has recently seen a flurry of attacks, including in urban areas. The Pakistani Taliban claimed multiple attacks this week on police that killed at least three officers, including one in the capital, Islamabad.

The Pakistani Taliban, emboldened since the Afghan Taliban seized power across the border in Afghanistan, warned this week of more attacks to come.