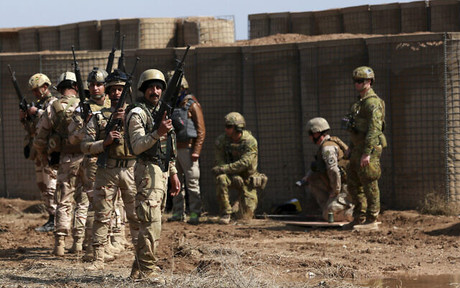 Three Iraqi soldiers were killed Monday morning in bomb blast targeting their patrol on a road in Kirkuk city, north of the capital Baghdad, a military source said.

A fourth soldier was injured in the same attack, which was not immediately claimed.

It follows an attack on an army base on Friday in which 11 soldiers were killed in the eastern Iraqi province of Diyala, that was later claimed by the Islamic State group.

The Friday attack coincided with a sophisticated IS assault on a Kurdish-run prison in Hasakeh in northern Syria aimed to free fellow jihadists.

Clashes continued for a fifth day Monday in Hasakeh, with reports of over 150 people having been killed.

IS rose to power in 2014 after claiming large swathes of Iraq and Syria and declaring itself a "caliphate".

Backed by the U.S.-led coalition, Iraq declared its "victory" over the group in late 2017, but has since continued to grapple with a low-level insurgency, flaring up at various points.

IS jihadists in Iraq have been concentrated in the Kirkuk region and the provinces of Salaheddin and Diyala.

They have also targeted fighters from the autonomous Kurdistan region in Iraq's north.

On December 3, at least nine Kurdish fighters and three brothers were killed in northern Iraq attacks blamed on the jihadist group.

IS also claimed a bombing against a market in Sadr city, a Shiite suburb of the capital Baghdad, that killed dozens of people in July last year.

A U.N. report last year estimated that around 10,000 IS fighters remained active across Iraq and Syria, many of them in Kurdish-controlled areas.