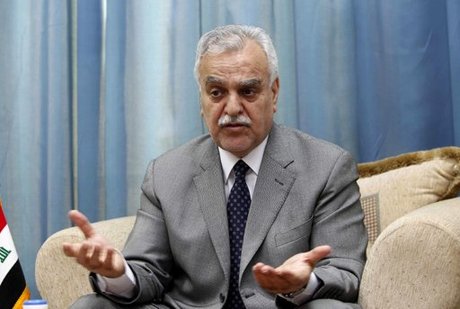 The Iraqiya bloc sent a "positive signal" by ending its parliament boycott, and its eventual return to the cabinet depends on how Iraq's premier responds, the country's fugitive vice president told Agence France Presse.

Tareq al-Hashemi, a Sunni, is accused of financing a death squad to target policemen, judges and officials and has been hiding out in Iraq's autonomous Kurdistan region since December.

The accusations against Hashemi, which he has strongly denied, came amid a wider conflict between the Sunni-backed Iraqiya bloc, of which he is a member, and the Shiite-led government.

Iraqiya began a boycott of parliament and the cabinet in December to protest what it charged was Prime Minister Nouri al-Maliki's centralization of power, and it has since called for Maliki to respect a power-sharing deal or quit.

Iraqiya's MPs returned to parliament on Tuesday, somewhat easing the crisis, but the bloc has not yet decided to return its ministers to the cabinet.

"The decision was made unanimously and I participated in that even though I am in Kurdistan," Hashemi said of Iraqiya's return to parliament, in an interview this week at his residence in Arbil, the capital of Kurdistan.

Asked about the end of Iraqiya's cabinet boycott, he said: "This depends on Maliki and State of Law (Maliki's list)," and "how they will react to this positive signal from the Iraqiya list."

"We are not a part of the crisis; we are a part of the solution, and we are looking to put an urgent end ... to the current crisis."

Hashemi also discussed his defense in the case against him and his associates, but did not directly address the charges themselves.

"It is my right to defend my reputation and honor and defend the innocence of my guards and employees," he said.

Hashemi's guards, including 16 the interior ministry claimed were training for assassinations with silenced rifles and pistols, and some members of his office staff, have been detained in recent weeks.

He said that if he cannot obtain justice from the Iraqi judiciary, "it is my right to go to the international judiciary."

Hashemi said he continues to enjoy support from Kurdish president Massud Barzani and Iraqi President Jalal Talabani, also a Kurd, and dismissed as "psychological warfare" rumors he could be turned over to the central government.

"I am here in Kurdistan and I am not worried about my future," he said.

"I am among my family and my loved ones in Kurdistan, but if Kurdistan becomes closed to Tareq al-Hashemi, God's land is vast."

Erdogan said on January 24 that "Maliki should know that: if you start a conflict in Iraq in the form of sectarian clashes, it will be impossible for us to remain silent."

"I reject foreign interference, even from neighbouring countries, in Iraqi affairs," Hashemi said. But, Erdogan's remarks were "legitimate, because what happened in Iraq will affect sooner or later in the Turkish internal affairs."