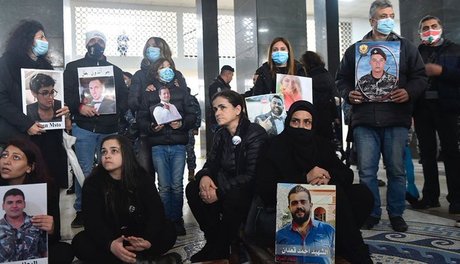 Families of the victims of last year’s explosion in Beirut’s port stormed Thursday the Justice Palace in Beirut, as they protested "towards justice."

Holding photos of their loved ones and Lebanese flags, the families rallied on Thursday morning outside the Justice Palace to urge a faster court decision regarding recusal lawsuits obstructing the investigation into the blast.

They expressed their support for the lead investigator into the Beirut port blast, Judge Tarek Bitar, who has been suspended for two months because of a delay in taking legal decisions after a deluge of recusal lawsuits filed by defendants.

"This bullshit has to end," said William Noun, brother of Joe Noun, a member of the Fire Brigade team who was killed by the devastating blast.

The families considered the delay to be an intentional obstruction to the probe as suspended Bitar waits for a court decision, from Judge Rola al-Masri, to return to work. Masri fails to appear to take the decision.

"The decision should have been taken a week ago," Noun said, adding that "it is unacceptable to take this case so lightly."

Families ended their sit-in inside the Justice Palace after they met with Higher Judicial Council chief Suheil Abboud who told them al-Masri is studying the lawsuit and "doing her job."

Your fight is doomed to fail.
Ebola will prevent the truth to come out.
They always do.

Sadly that' the truth. We do not live in a country, but a Jungle.