Hochstein Gives Lebanon 4 to 6 Weeks to Respond to Proposal 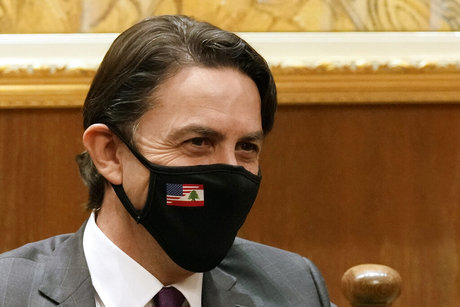 U.S. envoy Amos Hochstein gave Lebanese authorities a deadline of four to six weeks to respond to his suggestions regarding a maritime border dispute with Israel.

"There’s no later anymore. This is the later. This is the last minute," Hochstein said, pressuring Lebanon to accept what informed sources considered to be "less than Lebanon's property rights."

The sources told al-Joumhouria newspaper, in remarks published Friday, that Hochstein offered more than the Hof Line -- a demarcation proposed by Frederic Hof in 2012 -- but less than what Lebanon considers its property rights.

According to the sources, Lebanon’s share might expand in zigzag lines within a 1430 kilometer area created by the new demarcation.

"There is no return to the Hof Line", al-Akhbar newspaper claimed, considering the Line 23 a foregone conclusion.

The daily said it had learned that the negotiations have progressed towards Line 24 or Line 25, with no final agreement yet.

Israel and Lebanon had resumed negotiations over their disputed maritime border in 2020 but the process was stalled by Beirut's claim that the map used by the United Nations in the talks needed modifying.

Hochstein advised the Lebanese, grappling with an unprecedented financial crisis, to focus on "what you gain" not "what you may lose."

Lebanese politicians hope that commercially viable hydrocarbon resources off Lebanon's coast could help lift the debt-ridden country out of its financial crisis branded by the World Bank as one of the planet's worst in modern times, while Israelis are pushing for speeding up the negotiations to start drilling for gas in the disputed Karish field.