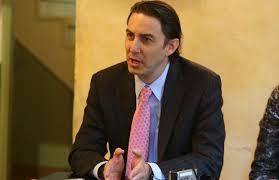 “The letter includes a written demonstration of the proposal that Hochstein had made verbally regarding the maritime demarcation of the southern border,” the sources said.

“It also includes answers to clarifications that the President had requested from the U.S. envoy,” the sources added, noting that the letter also contains an infographic about the demarcation line suggested by Hochstein and about the Qana field, which is a line based on (Lebanon’s) Line 23.”

The Lebanese leaders will study the written U.S. proposal before offering a unified answer to it, the sources added.