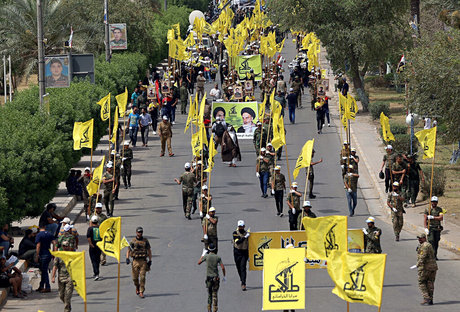 Wrangling over the Ukraine war has showed deep divisions in Lebanon and in the Middle East, where Moscow has embedded itself as a key player in recent years, making powerful friends among state and non-state actors while America's influence waned.

Hizbullah has railed against the government's condemnation of Russia's attack on Ukraine, calling for neutrality, after an unusually blunt Foreign Ministry statement caused an uproar and upset the Russians, forcing the minister to clarify that Lebanon did not intend to take sides and would remain neutral.

"They distance themselves and claim neutrality where they want, and they interfere and condemn where they want," Hizbullah lawmaker Ibrahim Moussawi wrote on Twitter, taking aim at the Foreign Ministry. "What foreign policy does Lebanon follow, and what is Lebanon's interest in that? Please clarify for us, foreign minister."

Hizbullah, which also sent thousands of fighters to neighboring Syria to shore up Assad's forces, has seized on Russia's invasion of Ukraine to portray it as an inevitable result of U.S. provocations and yet another betrayal by the United States of its allies – in this case, Ukraine.

The group, along with Shiite factions in Iraq and Houthi rebels in Yemen, vocally support Russia against Ukraine.

These groups are considered to be Iran's boots on the ground in the so-called anti-U.S. "axis of resistance."

Putin won their backing largely because of his close ties with Tehran and his military intervention in Syria's civil war in support of President Bashar Assad.

They see Putin as a steady, reliable partner who, unlike the Americans, does not drop his allies. In their circles, they even have an affectionate nickname for Putin — "Abu Ali" — which is a common name among Shiite Muslims and meant to portray a certain camaraderie.

Iran's allies in the region are outspokenly with Russia "because they are anti-American and anti-West and believe that Russia is their ally," said political analyst Ihsan Alshamary, who heads the Political Thought Think Tank in Baghdad.

Last week, 35 countries, including Iran and Iraq, abstained from a U.N. General Assembly vote to demand that Russia stop its offensive and withdraw troops from Ukraine. Lebanon voted in favor, while Syria, where Russian ties run deep, voted against.

It is only "an American aggression" if we are to be denied the freedom to govern ourselves and choose what is in the country's best interests in the eyes of all citizens living, working, and thriving here.

hizbullah, like russia is built on lies and misinformation. they do it all to keep their sheep in line

"Putin won their backing largely because of his close ties with Tehran and his military intervention in Syria's civil war in support of President Bashar Assad."
Naharnet thought it was buying a news report but it got an editorial from the AP.
AP does point us, unintentionally, toward recognizing another case of US provocation: Syria. Would MBS and KSA have the ISIS operation without US approval?