Judge Aoun Orders Arrest of Raja Salameh after Questioning Him 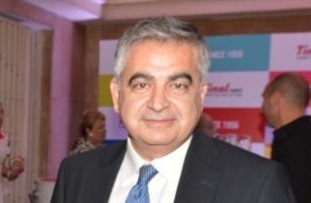 Mount Lebanon Prosecutor Judge Ghada Aoun on Thursday ordered the detention of the businessman Raja Salameh, the brother of Central Bank Governor Riad Salameh, after questioning him for several hours.

"Raja Salameh was detained during his interrogation at the Justice Palace and Central Bank Governor Riad Salameh will be summoned," the lawyers of the People Want to Reform the Regime group told al-Jadeed TV.

"The lawsuit against Raja Salameh under which he has been detained is based on an investigative report carried out by the Reuters agency," the lawyers added.

Al-Jadeed had earlier reported that the questioning was related to a lawsuit filed by an activist group.

The lawsuit accuses Raja Salameh of suspicious contracts and money transfers to accounts outside Lebanon, it said.

Al-Jadeed TV has quoted Judge Aoun as saying that Riad Salameh had used his brother to buy real-estate in France worth nearly $12 million.

There have been also reports that a brokerage firm, Forry Associates Ltd, owned by Raja Salameh, was hired to handle government bonds sales by the central bank in which the firm received $330 million in commissions. The governor said last November that "not a single penny of public money" was used to pay for Forry Associates Ltd.

Why doesn't this rogue judge question Bassil who is sanctioned by the USA for corruption?

Let us wait with the "whataboutism" and be happy that at last something is starting to happen...some are being held accountable. Of course we want ALL involved held accountable, and we will cross that bridge whan we reach it.

So you think this is pure investigation and not politically motivated? Ghada Aoun is a tool for Aoun and Bassil and is implementing their agenda.

Election time….. a “Aoun” is fighting corruption, please vote for the corrupt FPM haha what a farce.

When it comes to theft, Amal is #1, FPM #2, Future #3 and the rest share the crumbs (which are tens of billions anyways)