Ukraine Accuses Russia of Firing at Protesters in Occupied City 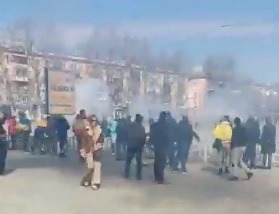 Ukraine said Monday that Russian troops had fired on protesters in Kherson demonstrating against Moscow's seizure of the southern city soon after it launched its invasion last month.

Ukrainian Foreign Minister Dmytro Kuleba posted a video on Twitter, showing a man with an armband of the Ukrainian flag wounded by gunfire.

Continuous shooting could be heard in the video, which showed people carrying flags running and rushing to help the man, with blood on the floor.

The person taking the video said the man is a pensioner.

"This is the ugly face of Russia, a disgrace to humankind. We must stop Russia! Sanction them, isolate them, hold war criminals to account," he added.

Kherson, a city of around 200,000 people, lies near Crimea -- a peninsula annexed by Russia in 2014 and one of the directions from which Moscow invaded Ukraine late last month.

It was the first Ukrainian city to fall to Russian forces, with Moscow capturing it within the first week of its invasion.

People in Kherson have held regular demonstrations against Russian control of the city.

Local media have reported several times that Russian forces have fired at the protesters.