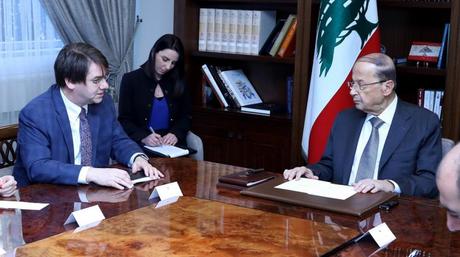 International Monetary Fund spokesman Gerry Rice has affirmed that the negotiations with Lebanon are making progress.

He said in a statement that the IMF delegation is working with the Lebanese authorities to prepare a reform plan that will help Lebanon and the Lebanese.

"We hope we will be able to achieve this," Rice added, stressing the deep and complicated challenges that Lebanon is facing.

High-level Lebanese sources have also reportedly affirmed that the negotiations are on the right track.

Meanwhile, sources have told LBCI that the U.S. believes "there is an actual opportunity for Lebanon to reach an agreement," pointing that the U.S. is willing to support Lebanon, "as the Lebanese stance against the Russian war has strengthened the relations between Lebanon and the U.S."

An IMF delegation had kicked off talks in Beirut Wednesday as part of a two-week mission aimed at securing progress towards funding for crisis-hit Lebanon.

Lebanon is hoping to secure a rescue package to exit a deep financial crisis that started in 2019 and has seen most of the country's population fall into poverty.