Search for survivors in Philippine villages hit by landslides, as death rises to 42 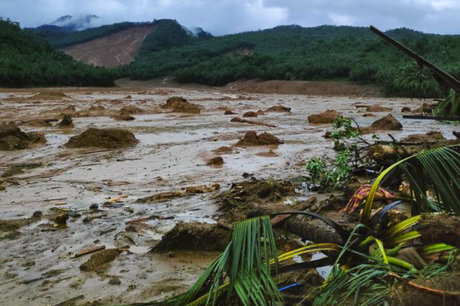 Rescuers hampered by mud and rain on Tuesday used their bare hands and shovels to search for survivors of landslides that smashed into villages in the central Philippines, as the death toll from tropical storm Megi rose to 42.

More than 17,000 people fled their homes as the storm pummeled the disaster-prone region in recent days, flooding houses, severing roads and knocking out power.

At least 36 people died and 26 were missing after landslides slammed into multiple villages around Baybay City in Leyte province -- the hardest hit by the storm -- local authorities said. Just over 100 people were injured.

Three people were also killed in the central province of Negros Oriental and three on the main southern island of Mindanao, according to the national disaster agency.

Most of the deaths in Leyte were in the mountainous village of Mailhi where 14 bodies were found, Army Captain Kaharudin Cadil told AFP.

"It was a mudflash that buried houses. We recovered most of the bodies embedded in the mud," said Cadil, spokesman for the 802nd Infantry Brigade.

Drone footage showed a wide stretch of mud that had swept down a hill of coconut trees and engulfed Bunga, another community devastated by the storm.

At least seven people had been killed and 20 villagers were missing in Bunga, which was reduced to a few rooftops poking through the mud.

"It's supposed to be the dry season but maybe climate change has upended that," said Marissa Miguel Cano, public information officer for Baybay City, where 10 villages have been affected by landslides.

Cano said the hilly region of corn, rice and coconut farms was prone to landslides, but they were usually small and not fatal.

Apple Sheena Bayno was forced to flee after her house in Baybay City flooded. She said her family was still recovering from a super typhoon in December.

"We're still fixing our house and yet it's being hit again so I was getting anxious," she told AFP.

Rescue efforts were also focused on the nearby village of Kantagnos, which an official said had been hit by two landslides.

"There was a small landslide and some people were able to run to safety, and then a big one followed which covered the entire village," Baybay City Mayor Jose Carlos Cari told local broadcaster DZMM Teleradyo.

Some residents managed to escape or were pulled out of the mud alive, but many are still feared trapped.

Other victims have been piggybacked to safety.

Four people have been confirmed dead in Kantagnos, but it is not clear how many are still missing.

"We're looking for many people, there are 210 households there," said the Baybay City mayor.

The military has joined coast guard, police and fire protection personnel in the search and rescue efforts.

But bad weather has hampered the response. The search was suspended late in the afternoon as it was "too dangerous" to continue in the dark, Cano said.

"There were people in their homes that were hit directly by the landslide," Timbal told AFP.

Tropical storm Megi -- known in the Philippines by its local name Agaton -- is the first major storm to hit the country this year.

Whipping up seas, it forced dozens of ports to suspend operations and stranded more than 9,000 people at the start of Holy Week, one of the busiest travel periods of the year in the mostly Catholic country.

Scientists have long warned typhoons are strengthening more rapidly as the world becomes warmer due to climate change.

The Philippines -- ranked among the most vulnerable nations to its impacts -- is hit by an average of 20 storms every year.