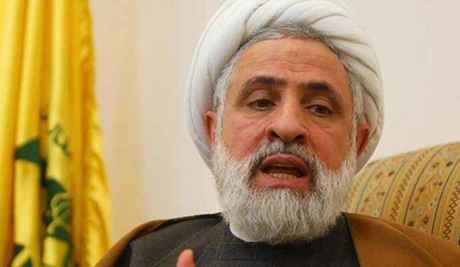 Hizbullah deputy chief Sheikh Naim Qassem has announced that his party wants a “national unity” government to be formed after the upcoming parliamentary elections.

“Our project is partnership with everyone and a national unity government,” Qassem said in an interview with Hizbullah’s al-Nour radio station.

“We don’t have any plan to change the (political) system and we don’t propose any modifications. As for those who have changes that they consider to be appropriate, there are legal mechanisms for that,” Hizbullah’s number two added.

Commenting on the latest return of the Saudi and Gulf ambassadors to Lebanon, Qassem said the envoys who returned “realized that their absence would not put pressure on Hizbullah but would rather deprive them of the possibility of” making use of their presence in the country.

"United we will steal" should be Hizbala's new moto for 2022.

Hizbollah was created, funded, armed and indoctrinated by Iranian radicals to be the attack dog for Iran's nuclear program & regional ambitions. They occupied Lebanon thank to traitors Aoun, Bassil & Frangie who sold Lebanon to Iran's radicals for 30 pieces of silver. Hizbollah with Assad complicity killed Tueni, Hariri and those who believed in sovereignty, freedom and justice. Tried to kill Boutros Harb as a favor to Bassil. Hizb is synonymous with drug dealing, money laundering and international terrorism. Still to find role in Port tragedy and war crimes in Syria. Ton of lawyers needed to bring these criminals and FPM puppets to justice. Hizb local support is as solid as Saddam & Kadafi 99% support before downfall. No one more than Hizb harmed Shia. Shia are the most affected by economic collapse and world isolation. Would Imam Moussa Saddr Shia wake up before elections to prevent irreversible path to Hell? Otherwise they will be blamed justifying unescapable move to federalism.

No thanks, I don`t wanna be locked in with criminals and terrorists.

“We don’t have any plan to change the (political) system and we don’t propose any modifications. As for those who have changes that they consider to be appropriate, there are legal mechanisms for that,” Hizbullah’s number two added.
To amend the Constitution so as to remove the tremendously advantageous positioning of "Christians": the 50% set-aside of Parliamentary seats of Article 24: what is the legal mechanism for that?

The basic issues need the consent of two-thirds of the Government members, as specified in the decree of its formation. The following are basic issues: Amending the Constitution, declaring and canceling the state of emergency, war and peace, public mobilization, international accords and treaties, state budget, overall development plans, and long term, appointing employees of the first cadre and its equivalent, reconsidering the redistricting, dissolving the Chamber of Deputies, elections law, nationality law, personal affairs laws, dismissing the Ministers.

That's from Article 65. So it appears that if the Christian minority blocks "appropriate changes", none can happen.

You always add value to any conversation.

I'll bet you're not really laughing.