At least 6 dead, 48 rescued after migrant boat capsizes off Tripoli 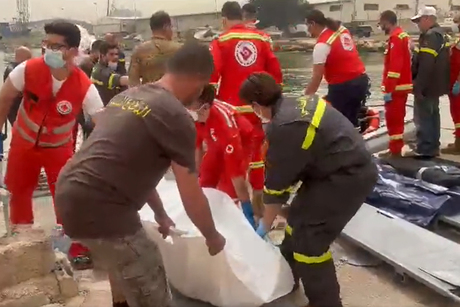 At least six people died, including a little girl, and almost 50 others were rescued after an overloaded migrant boat capsized off north Lebanon during a chase by naval forces, Lebanese officials said.

The boat carrying nearly 60 people capsized on Saturday night near the port city of Tripoli, the departure point for a growing number of people attempting a potentially lethal sea escape.

The deadly accident, weeks ahead of parliamentary elections scheduled for May 15, is not the first of its kind for the crisis-hit country grappling with its worst-ever financial crash.

But it marks a grim reminder of the suffering behind a growing number of people, including Lebanese nationals and Syrian refugees, risking their lives at sea in search of a future abroad.

"The army's naval forces managed to rescue 48 people and retrieve the body of a dead girl... from a boat that sank while trying to illegally smuggle them out," the army said in a statement, adding that a suspect had been arrested for alleged involvement in the smuggling operation.

"Most people on board were rescued," the army said, without specifying their nationalities.

The army retrieved five corpses off Tripoli's coast on Sunday, the state-run National News Agency reported, hours after the body of a little girl was returned to shore.

"My nephew, he has five children and his wife is pregnant with twins. He was trying to escape hunger and poverty," one man told AFP at Tripoli's port, where he was waiting to hear news of his missing relative.

Haitham Dannaoui, the head of Lebanon's naval forces, said the 10-meter (33-foot) boat built in 1974 was crammed with nearly 60 would-be migrants and took to sea without any safety precautions.

He told a news conference that the army tried to thwart the smuggling operation before the ship sailed out of the Qalamoun region, south of Tripoli, but could not reach the departure point in time.

"Unfortunately, the captain (of the migrant boat) decided to carry out maneuvers to escape," leading to the vessel crashing into the patrol ships, Dannaoui said.

The impact cracked the hull of the migrant boat, which quickly submerged, he said.

"In less than five seconds, the boat was under water," Dannaoui said, adding that passengers were quickly handed life jackets.

But one of the survivors said a naval ship had deliberately crashed into the migrant boat to force them to return.

"The patrol boat crashed into us twice...to drown us," the man told AFP at the port, before he was silenced and carried off by a crowd of survivors' relatives.

Last November, a boat carrying dozens of would-be migrants also sank off Tripoli's coast after being chased by the Lebanese army.

The passengers were rescued and towed back to shore.

The latest incident stoked public anger in Tripoli, Lebanon's second city and one of its poorest.

Growing poverty and unemployment rates have turned Tripoli into a launchpad for illegal migrants.

Calls circulated on social media networks for protests outside the Tripoli home of Prime Minister Najib Miqati, who declared Monday a day of national mourning to grieve the victims.

The relatives of the victims and the missing lashed out at the country's leaders.

"The people of Tripoli are destined to die," said Nissrine Merheb who hasn't heard from her two cousins and their three children since the sinking.

"Even when we are trying to run away from the filth of politicians and their corruption... death catches up with us."

Lebanon, which has a "turnback" agreement with Cyprus to prevent crossings, is in the grips of an unprecedented financial crisis, with the currency losing more than 90 percent of its value and the majority of the population living below the poverty line.

The economic crash has spurred an uptick in sea crossings out, with an increasing number of Lebanese joining the ranks of Syrian and Palestinian refugees trying to illegally cross into Europe.

The U.N. refugee agency says at least 1,570 people, 186 of them Lebanese, left or tried to leave illegally by sea from Lebanon between January and November 2021.

Most were hoping to reach European Union member Cyprus, an island 175 kilometers (110 miles) away.