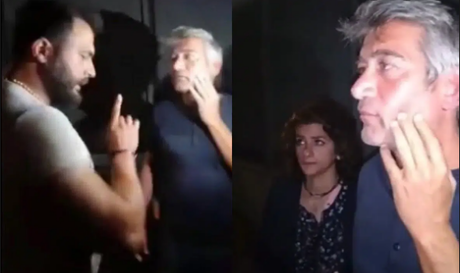 Energy Minister Walid Fayyad was physically assaulted by activists outside a restaurant on Sunday night.

An online video shows an activist saying “this is a message from all the Lebanese people” before violently pushing Fayyad to a wall. You need to “wake up,” he tells the minister.

Another man is meanwhile seen telling Fayyad that his mother “has no electricity” and that “a massacre happened in Tripoli” whereas he was “having a drink.”

A female activist meanwhile tells the minister that she was interrogated at a State Security center along with other female activists due to his “corruption.”

This is not the first time Fayyad has been intercepted by activists at a restaurant since he was appointed as minister. He is often seen at public places without bodyguards.

Congratulation Cowards! Attacking a person saving the lebanese money paid to personal security.bravo! Manly of you. Try that on Berri, Jumblat, Geagea or even a director of telecom.

Is that what the thear ares? Thugs?

Agree. He might be a flake IMO, but physically attacking him was uncalled for. It's like having a beef with McDonald's and pushing around the girl in the paper hat asking you if you wanted fries with that. BTW not only Berri, Jumblat, Geagea, but also Hassan the sewer rat and Bassil, the later actually had his gorillas physically assault a girl in Batroun because she had the temerity of accusing the saintly dwarf of corruption.

Agree... A PEACEFUL one-million plus march similar to Cedar Revolution is needed regardless of election results. This will topple any government and parliament, especially that the entire world and capable diaspora are waiting for this signal to start rescuing Lebanon from the Basij and corrupts, introduce needed reforms, and relaunch the economy on correct path.