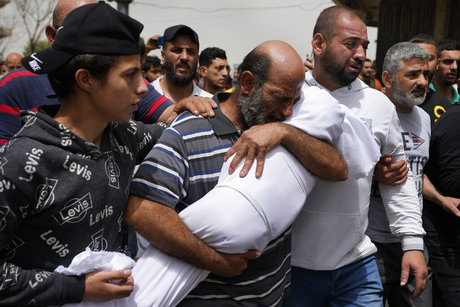 Funerals were held across northern Lebanon on Monday for seven people killed when a boat packed with migrants sunk over the weekend as the Lebanese navy tried to force it back to shore.

The small vessel was carrying nearly 60 people -- many times its capacity -- when the disaster struck on Saturday night. The tragedy was the latest in a growing trend involving mostly Lebanese and Syrians trying to travel to Europe from Lebanon in search of better lives.

The navy rescued 47 people and some are still missing.

Among those laid to rest on Monday were Sarah Ahmed Talib and her four year old daughter from the Bab al-Tabbaneh neighborhood of Tripoli, Lebanon's second-largest city.

Women wailed from balconies in Tripoli as bodies were carried to the mosque and bursts of gunfire rang out in mourning. Dozens attended the funerals.

The migrant vessel had set off from the coastal town of Qalamoun on Saturday night, Lebanese officials have said, adding that no precautionary measures were taken and no one was wearing life vests when the boat meant to carry only six people capsized later that night.

The circumstances that led the small and overloaded craft to sink were not entirely clear, with some survivors claiming the navy rammed into their boat, and officials insisting the smuggler attempted reckless escape maneuvers.

Angry residents attacked a main army checkpoint in Tripoli on Sunday, throwing stones at troops who responded by firing into the air. Some shops closed as angry men blocked several streets in Tripoli, Lebanon's most impoverished city. There were no reports of injuries.

Since Lebanon's economic meltdown began in October 2019, hundreds have left on boats hoping for a better life in Europe, paying smugglers thousands of dollars. Many have made it to European countries, while others have been stopped and forced to return home by the Lebanese navy.

Several have lost their lives on the way to Europe over the past three years.

They are whiling to chance death to survive in dignity, sad.