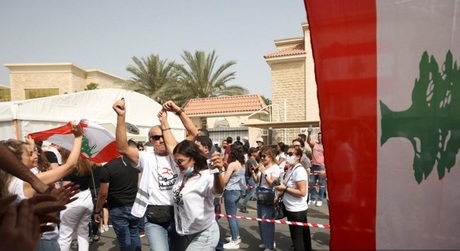 Foreign ministry official Hadi Hashem announced Monday the end of the expat voting for the Lebanese parliamentary elections, with Canada and the U.S. -- home to the largest community of registered voters -- being the last two countries to close the ballots.

The turnout of Lebanese diaspora voting in 58 countries was nearly 60 percent, according to Hashem, with Syria registering the highest participation of 84 percent and Iraq the lowest.

In Dubai, people queued for up to three hours to vote, braving the Gulf heat outside the Lebanese consulate.

"I voted for change," said Abed Saad, who cast his ballot in Dubai.

"If we don't vote, others will win, and we don't want them to win," the 27-year-old said, referring to established parties.

Although many of the Lebanese had emigrated to the Arab financial hub to escape their country’s mounting crises, the atmosphere was joyous as voters snapped selfies showing off inky fingers and blasted patriotic pop music.

“This is not change,” said Kamal Shehadi, an executive driven to Dubai by Lebanon’s government corruption, voting on Sunday for environmentalist and private sector candidates. “It’s the march of a thousand steps, and this would be step four or five if we’re lucky to get a few of our people elected.”

Across Europe, turnout by Sunday afternoon was at 20 percent with France accounting for the highest number of voters.

In France, several voters almost came to blows when one shouted at two supporters of President Michel Aoun's Free Patriotic Movement, which is politically allied with Hizbullah.

“You have brought the country to collapse. You have no honor or national sentiments,” the man screamed. The tense standoff mirrored divisions at home, where Lebanese are deeply fragmented along sectarian and ideological lines.

"I have a great feeling of hope and satisfaction because I saw that there were a lot of young people and first-time voters," Lebanon's ambassador to Paris Rami Adwan told AFP.

Lebanese citizens living abroad were able to vote for the first time ever for their 128 members of parliament in 2018.

On Friday, early voting for expatriates took place in nine Arab countries and Iran, where more than 18,000 Lebanese cast their ballots with voter turnout reaching 59 percent -- a slight increase of two percent from 2018 polls.

Although there are no official figures, Lebanon's diaspora is estimated to be more than double the size of its domestic population of over four million.

But voter registration, while on the rise, remains relatively low among the millions of Lebanese who live abroad.