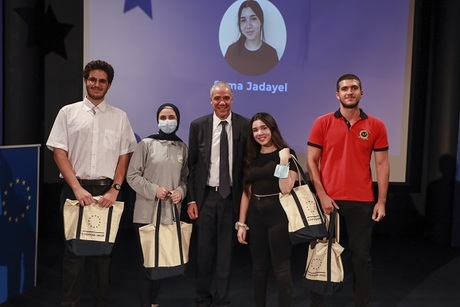 On Monday, May 9, 32 students from eight private and public schools across Lebanon participated in a contest celebrating Europe Day, as 2022 marks the European Year of the Youth.

The contest, which covered such topics as art, literature, history, geography, and sports, took place at the Pierre Abou Khater Amphitheater in Beirut.

“The day was a great occasion for students to gain insights into the European Union’s institutions and evolution, as well as into the 27 Member States that make up the Union,” a statement said.

The Europe Day contest, organized by the European Union Delegation to Lebanon, also helped shed light on “Lebanon's importance as a neighbor and partner of the European Union, with whom it shares deep cultural and economic ties,” the statement added.

The competition took place in the presence of Ralph Tarraf, European Union Ambassador to Lebanon, and Imad al-Ashqar, Director General of the Ministry of Education and Higher Education.

In his opening address, Ambassador Tarraf welcomed students and expressed his happiness to be celebrating Europe Day, in person, with Lebanese youths.

The competition kicked off with students divided into 4 groups of 8, each answering 15 multiple-choice questions, with the winners from each group advancing to the second round. In it, students had to buzz fastest to answer first, with Syma Jadayel from the International School (Koura) declared the winner of the competition after registering the highest score.

The event ended with the distribution of awards and a small cocktail reception.

Europe Day is celebrated every year on May 9 to celebrate peace and unity in Europe. The date marks the historic Schuman Declaration that bred a first-of-a-kind form of political cooperation among European states. This Declaration is considered the founding stone of what is known today as the European Union.