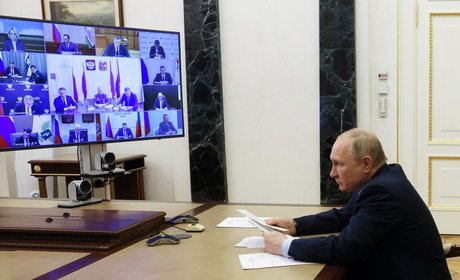 Russian President Vladimir Putin urged authorities on Tuesday to take stronger action to prevent wildfires and increase coordination between various official agencies in dealing with them.

Speaking in a video call with federal and regional officials, Putin emphasized that wildfires that hit Russia last year were the biggest in years and asked local governors to report on measures that were taken to increase fire safety across the country.

He noted that a series of wildfires already spread across several regions.

"We can't allow a repeat of the last year's situation," Putin said. "We need to combat fires in a more efficient, systemic and consistent way."

He reaffirmed the importance of forests for dealing with global warming, noting that "large-scale wildfires undermine our climate protection efforts."

"This issue is of principal importance for our country and the entire world," he said.

In recent years, Russia has recorded high temperatures that many scientists regard as a clear result of climate change. The hot weather, coupled with the neglect of fire safety rules, has caused a growing number of wildfires that authorities say have consumed more than 17 million hectares (42 million acres) last year in Russia.

Russian experts decried a 2007 decision to disband a federal aviation network tasked to spot and combat fires and turn over its assets to regional authorities. The much-criticized transfer led to the force's rapid decline.

The government later reversed the move and reestablished the federal agency in charge of monitoring forests from the air. However, its resources remain limited, making it hard to survey the massive forests of Siberia and the Far East.

The authorities responded to last year's fires by beefing up monitoring assets and rapid response forces. The Kremlin has ordered to earmark additional funds for combating the blazes.