Saniora denies 'betraying' Hariri, says he'll stand by him if he returns 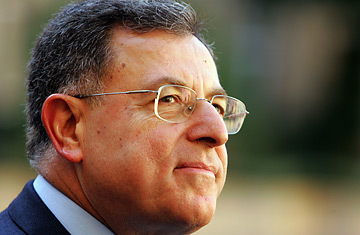 Ex-PM Fouad Saniora on Tuesday strongly dismissed accusations that he has “betrayed” ex-PM Saad Hariri by engaging in the electoral battle despite al-Mustaqbal Movement’s decision to boycott the vote.

“He who can accuse Saniora of betrayal is ‘yet to be born,’” Saniora said in an interview on MTV in response to a question.

“When Hariri wants to return, he will have his position, respect and symbolism, and if he returns I will stand by him,” Saniora added.

“Ex-PM Hariri has his symbolism and is loved by the people, but he did not tell the Lebanese not to vote,” Saniora noted, urging Beirut’s residents and all Lebanese citizens to “turn out heavily in the elections.”

He explained that boycott would lead to lowering the electoral quotient, which “would allow newcomers to usurp the opinion of Beirut’s residents and the Lebanese and would allow Hizbullah and its allies to replace the sovereign forces.”

“We are confronting those who usurped the will of the Lebanese through the statelet,” Saniora said of the electoral list that he is backing in Beirut’s second electoral district.

“The state is kidnapped by Hizbullah and the free decision no longer exists. Democratic politics in the country have been undermined and the Lebanese are the ones paying the price,” Saniora added.

Asked about his electoral alliance with the Lebanese Forces, the ex-PM said: “This law is bad and it obliges all people to forge alliances.”

He however added that he agrees with the LF on “a lot of issues.”

Responding to remarks voiced Monday by Hizbullah chief Sayyed Hassan Nasrallah, Saniora said: “Lebanon wants Sayyed Hassan to treat it in a different way and he knows that it was the state that rebuilt the South with Arab help” after the July 2006 war.

“The Lebanese embraced the resistance and defended it when its weapons were pointed at the Israelis,” he said, lamenting that Hizbullah’s arms were later “turned against the Lebanese.”

Maybe ten centuries ago you'd see Muslims turning on each other and sacrificing the common good. These Sunni KSA-sell-outs who support the Article-24 set-aside of half of the Lebanese parliament to Christians sell themselves into slavery. Yet my sternest criticism is of Hizbullah whose leadership refuses to even mention Article 24. One official said that legal reform was a possibility, but the Constitution requires a two-thirds approval of major changes, and since half are Christians, that will never happen. The first step is for Hizbullah to endorse the idea of majority rule.

Not one of your best, but still profound and shocking!