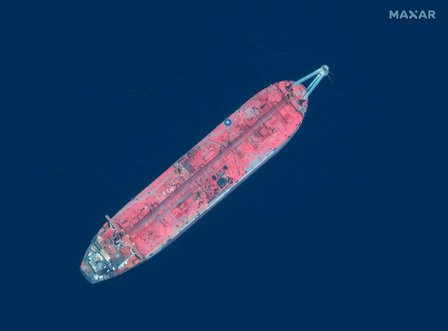 The United Nations was seeking $144 million on Wednesday needed to fund the salvage operation of a decaying tanker full of oil moored off the coast of Yemen, a ship whose demise could cause an environmental disaster.

The amount includes $80 million to transfer the more than 1 million barrels of crude oil the FSO Safer is carrying to storage, said David Gressly, the U.N. humanitarian coordinator for Yemen.

The pledging conference, co-hosed by the U.N. and the Netherlands, comes more than two months after the U.N. and Yemen's Houthi rebels reached an agreement to transfer the tanker's contents to another vessel. The agreement also includes a U.N. commitment to provide within 18 months a "replacement equivalent to the FSO Safer suitable for export."

The Iranian-backed Houthis control Yemen's western Red Sea ports — including Ras Issa, just 6 kilometers (about 4 miles) from where the FSO Safer has been moored since the 1980s.

The Houthis on Tuesday criticized the U.N. for allegedly "not presenting an operational plan" to maintain the tanker, more than two months since they signed the memorandum of understanding, a statement that could complicate U.N. efforts to raise funds.

There was no immediate comment from the U.N. on the Houthi statement but the organization previously accused the rebels of delaying its maintenance plans.

Gressly said the U.N. estimates that about $20 billion would be needed to just clean up an oil spill, which would likely impact nearby countries, including Saudi Arabia, Djibouti and Eritrea. He also said the first phase of the salvage should be completed by the end of September, otherwise it could face turbulent winds that start in October.

The Japanese-built tanker was sold to the Yemeni government in the 1980s to store up to 3 million barrels of export oil pumped from fields of Marib province, currently a battlefield. The ship is 360 meters (1,181 feet) long with 34 storage tanks.

Since 2015, annual maintenance on the ship has come to a complete halt. Most crew members, except for 10 people, were pulled off the vessel after the Saudi-led coalition entered Yemen's civil war in 2015 on the side of the internationally recognized government.

Yemen's conflict started in 2014 when the Houthis took control of the capital and much of the country's north, forcing the government to flee to the south, then to Saudi Arabia.

Internal documents obtained by The Associated Press in 2020 show that seawater has entered the engine compartment of the tanker, causing damage to pipes and increasing the risk of sinking. Rust has covered parts of the tanker and the inert gas that prevents the tanks from gathering inflammable gases, has leaked out. Experts say maintenance is no longer possible because the damage to the ship is irreversible, according to an AP report.

The U.N. has repeatedly warned that the tanker could release four times more oil than the notorious Exxon Valdez disaster off Alaska in 1989.