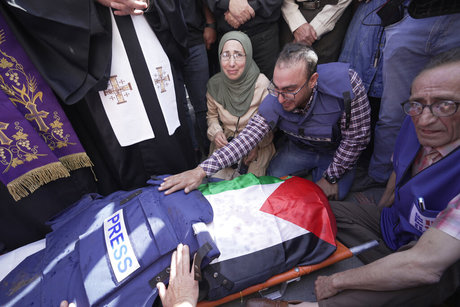 The U.S. envoy to the U.N. on Wednesday said the killing of Palestinian-American Al-Jazeera journalist Shireen Abu Akleh as she covered an Israeli army raid in the occupied West Bank must be "investigated transparently."

"We're encouraging both sides to participate in that investigation so that we can get down to why this happened," U.S. ambassador Linda Thomas-Greenfield said, adding that Washington's "highest priority is protection of American citizens and the protection of journalists."

The European Union meanwhile "strongly" condemned the killing and demanded an independent investigation into the circumstances of her death.

"It is essential that a thorough, independent investigation clarifies all the circumstances of these incidents as soon as possible and that those responsible are brought to justice," it continued.

"It is unacceptable to target journalists while they perform their job. Journalists covering conflict situations must be ensured safety and protection at all times."

The European Union statement did not attribute blame for the shooting.

Israel's Prime Minister Naftali Bennett said it was "likely" that "armed Palestinians -- who were indiscriminately firing at the time -- were responsible for the unfortunate death of the journalist."

An AFP photographer reported that Israeli forces were firing in the area and that he then saw Abu Akleh's body lying on the ground, with no Palestinian gunmen visible at the time.

U.S. urges transparent probe... the probe already done and the Journalist was at fault 100%...

RT.com quotes someone saying she was wearing a helmet and that the bullet struck below the helmet: an aimed shot.

Al Jazeera claims it has irrefutable evidence that Israel killed the journalist "in cold blood." It must disclose that evidence immediately to validate its claim.

How about the weapon used to kill Shireen is only in the hands of the terrorist zionist army? Only they target journalists in this way in that area. Shireen Abu Aqleh is a well respected voice of the Palestinian people. But yeah lets pretend israel had no desire to kill yet another Christian Palestinian who dared to expose the filthy non-stop crimes of the blood loving zionists.

Arturo, with all due respect your an ignorant individual...

Arturo, other journalists at the scene witnessed the execution. What nonsense are you trying to spew here? B’t selem NGO analysis based on Israeli military data confirmed there were no Palestinian shooters in the vicinity.