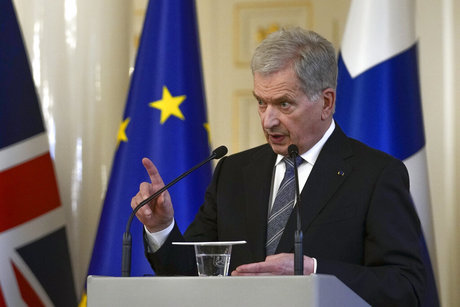 Finland on Thursday took a step towards fast-track membership of NATO, triggering a warning from the Kremlin, as the war in Ukraine throttled supplies of Russian gas to Europe.

"Finland must apply for NATO membership without delay," President Sauli Niinisto and Prime Minister Sanna Marin announced in a statement in Helsinki.

"As a member of NATO, Finland would strengthen the entire defense alliance."

But Russia warned Finnish membership of NATO would "definitely" be seen as a threat.

"The expansion of NATO and the approach of the alliance to our borders does not make the world and our continent more stable and secure," spokesman Dmitry Peskov said.

In launching the invasion of Ukraine, Russian President Vladimir Putin cited in part what he called the threat to Russia from NATO, which expanded eastwards after the Cold War.

Finland's embrace of the alliance was ruled out as recently as January, for the country has been a declared neutral in East-West crises for decades.

But the February 24 invasion shocked the Nordic country.

It shares a 1,300-kilometre (800-mile) border with Russia and its past is studded with conflict with its giant neighbor.

The Atlantic alliance has already declared it will warmly embrace two countries with rich pockets and advanced militaries.

A special committee will announce Finland's formal decision on a membership bid on Sunday.

Sweden, another neutral state, is widely expected to follow its neighbor.

Fears grew meanwhile of the broader economic impact from the crisis.

Russian energy giant Gazprom said that gas transiting to Ukraine to Europe dropped by a third after Kyiv suspended supplies through a key route.

Germany said Wednesday that it saw a 25 percent drop in supplies of Russian gas flowing through Ukraine.

Ukraine is a major supply route for Russian gas to Europe and the two sides have kept flows going despite the conflict.

The European Union's heavy reliance on Russian gas has made it reluctant to add these imports to a list of economic sanctions that have started to take a toll on Moscow's foreign exchange reserves.

European Commission President Ursula von der Leyen, in a rhetorical blast from Tokyo, said Russia "is today the most direct threat to the world order with the barbaric war against Ukraine".

Moscow has focused on eastern and southern Ukraine since it failed to take Kyiv in the first weeks of its campaign.

Ukraine's presidency said shelling continued throughout the Lugansk region -- part of the eastern Donbas where Ukrainian forces are mounting a fierce defense against Russian forces and Kremlin-backed separatists.

Russian troops are trying to take complete control of Rubizhne, block a key highway between Lysychansk and Bakhmut highway and seize Severodonetsk, the office said.

In the northeastern region of Chernigiv three people were killed and 12 others wounded on Thursday in a strike on the town of Novgorod-Siversky, an emergency services spokesman said.

Across Ukraine, lives have been turned upside down, forcing millions to make anguished choices of how to respond.

Zhanna Protsenko, a social worker in the frontline town of Orikhiv, spoke to AFP as she was about to head off on her bicycle to visit people who refused -- or were unable -- to evacuate.

"How can I leave them here?" the 56-year-old asked, standing near a hospital that was hit by a strike in the past week.

"We work. We have no time to hide," she said as contractors repaired rows of the hospital's blown-out windows and an oil drum-sized hole blasted in its brick façade.

The Russian invasion has sparked an exodus of nearly six million civilians, many of whom bear accounts of torture, sexual violence and indiscriminate destruction.

The Ukrainian prosecutor general on Wednesday said it would launch the first trial for war crimes.

Vadim Shishimarin, a 21-year-old Russian soldier, is accused of killing an unarmed 62-year-old civilian as he fled with four other soldiers in a stolen car.

The prosecutor's office says it has said it has received reports of more than 10,000 alleged war crimes, with 622 suspects identified.

The UN Human Rights Council is due to hold a special session on Ukraine on Thursday.

Ukrainian President Volodymyr Zelensky has framed his nation's resistance to the Russian invasion as a "war against tyranny", but the fierce fightback has carried a heavy cost.

In a rare release of battle casualty figures, Ukraine's National Guard said Wednesday that 561 of its members have been killed and nearly 1,700 wounded since the invasion began.

Neither the defense ministry in Kyiv nor its counterpart in Moscow has provided official death counts, but in mid-April, Zelensky said between 2,500 and 3,000 Ukrainian soldiers had been killed.

A Ukrainian commander in the port city of Mariupol, where besieged troops are holding out at steelworks, appealed directly to Elon Musk for help.

Serhiy Volyna, commander of the 36th Separate Marine Brigade, said he created a Twitter account for the sole purpose of reaching out to Musk.

"People say you come from another planet to teach people to believe in the impossible," Volyna tweeted at Musk.

"Our planets are next to each other, as I live where it is nearly impossible to survive. Help us get out of Azovstal to a mediating country. If not you, then who?"