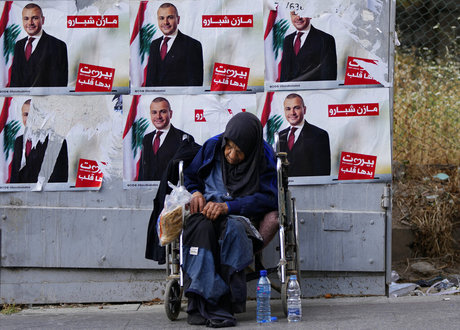 In households across Lebanon, it's likely that one or more family members are planning to emigrate -- if they can get a passport. Demand is high but the bankrupt government has not paid the company contracted to issue or renew the documents.

Lebanese spend their days at the banks, waiting to see what meager amounts they will be allowed to withdraw for the month. They install batteries and solar panels at great cost so their family can survive the humid summer months without electricity from the grid.

They hunt for medicine and fuel, and worry about securing the next meal for their kids.

It's an economic meltdown and Sunday's parliament elections are seen as a last chance to reverse course and punish the current crop of politicians who have driven the small nation into the ground.

Instead, a widespread sense of apathy and pessimism prevails, with most observers agreeing the vote is unlikely to make much difference.

"Who should I vote for? Those who stole my money, plundered the country and exploded Beirut? Or those nobodies who cannot agree on anything?" said Samir Fahd, a schoolteacher whose once comfortable income of about $3,400 a month is now worth the equivalent of $200.

On election day, he will stay at home, he says.

The vote is the first since Lebanon's implosion started in October 2019, triggering widespread anti-government protests against a corrupt ruling class that has been in place since the country's 15-year civil war ended in 1990.

It is also the first election since the August 2020 massive explosion at Beirut's port that killed more than 200 people, injured thousands and destroyed parts of Lebanon's capital. The blast, widely blamed on negligence, was set off by hundreds of tons of poorly stored ammonium nitrate that ignited in a port warehouse after a fire broke out at the facility.

Nearly two years later, there are still no answers as to what caused the highly explosive material to ignite, or why it had been stored there for years. A judicial investigation has been suspended for months, amid a deluge of legal challenges by politicians seeking to block the probe.

Today, huge billboards and posters of candidates line the highway along the still-wrecked harbor -- a jarring sign how political parties still throw money around while the country is bankrupt. At least two of the politicians wanted in connection with the blast investigation are running for parliament.

Michel Murr, son of a former defense minister and grandson of a longtime powerful member of parliament and minister, is also running for a seat in the assembly -- though he acknowledged the seeming futility of the election. He said he didn't release an electoral program because he did not want to "deceive people by telling them I will do this and that" -- promises he might not be able to keep.

"It seems almost impossible to imagine Lebanon voting for more of the same -- and yet that appears to be the likeliest outcome," wrote Sam Heller, a Beirut-based analyst and fellow at Century International.

Fahd, the schoolteacher, believes it is futile to expect change in a system based on sectarianism and large-scale patronage that he said is "administered by an entrenched mafia."

"Elections don't change anything, it's all a joke and they are all coming back whether we like it or not," said the 54-year-old.

While he's staying home, he said other members of his family plan to vote for the Lebanese Forces, a right-wing Christian party from the civil war believed to be receiving financial backing from Saudi Arabia.

Some believe the party is the most capable of standing up to the Shiite Hizbullah group, which dominates politics in Lebanon. Hizbullah holds the current parliamentary majority along with its allies, including the Lebanese Forces' rival Christian faction founded by President Michel Aoun -- the Free Patriotic Movement.

Heavily armed and backed by Iran, Hizbullah is expected to retain or possibly boost that majority in Sunday's vote, likely benefiting from a vacuum on the Sunni leadership scene after former Prime Minister Saad Hariri bowed out of politics last year.

Many have traditionally chosen candidates based on family, sectarian or regional ties, and are wary of newcomers they fear would be powerless to stand up to entrenched politicians.

Lebanese parties have long relied on a system that encourages voters to cast ballots in return for favors and individual benefits. Political parties offer protection, assistance, medical services and other needs -- if you vote for them.

"They have the material resources they need to dispense patronage and mobilize voters. And those voters, amid Lebanon's economic collapse, are likely even more dependent on politicians' clientelist largesse to survive," Heller wrote.

Many argue that people should vote for anyone outside the current ruling clique if there is to be any hope for change and recovery in Lebanon.

"What more should they do to us before we all vote against them??" posted Paul Naggear, father of one of the youngest victims of the Beirut port blast.

Lebanon's demise has been staggering. In just two and a half years, the majority of the once middle-income population has been plunged into poverty, the national currency collapsed, and foreign reserves have run dry. The World Bank has described the crisis as among the world's worst in over a century.

Tens of thousands have left the country, including nurses, professors, doctors and engineers. Last month, dozens of people drowned at sea after a boat carrying about 60 migrants capsized off the coast.

"Today the country stands as a 'failing state'," Olivier De Schutter, the U.N.'s special rapporteur on extreme poverty and human rights, said in a report published this week, after he visited Lebanon. He added that the country's "political leadership is completely out of touch with reality."

Many people say they are sick of the political class but don't see an alternative.

"People are in survival mode and that concern takes precedence over any other concern," said Maha Yahya, director of the Malcolm H. Kerr Carnegie Middle East Center. There is no serious opposition capable of drawing a roadmap for deliverance.

"This might explain why many will vote for the same political class," she said, adding that the election may bring some changes in some parliamentary seats -- but not the kind of change people really need.

Some of the newly formed political advocacy groups have been trying to convince people to believe in the process and vote.

"It's not a very difficult choice, we are dying a slow death," said Diana Meneem, a candidate from the Kulluna Irada advocacy group, speaking on a recent podcast. "This time, give someone new a chance."