Bassil: Those who vote for LF would be voting for Daesh and Israel 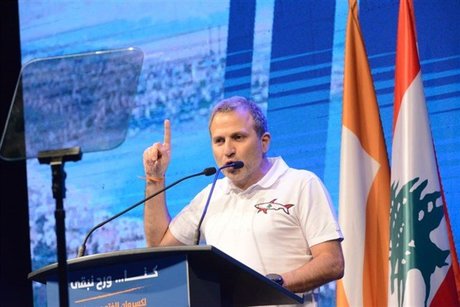 Free Patriotic Movement chief Jebran Bassil has launched a vehement verbal attack on the Lebanese Forces and its leader Samir Geagea, during an electoral rally in the Keserwan-Jbeil district.

“Samir Geagea has never ceased being a part of the Israeli scheme in Lebanon. Israel occupied our land and destroyed our country several times and Israel is, until today, still obstructing our extraction of our oil and gas. Israel aggresses against us every day in air and at sea and it has left half a million Palestinian refugees on our land,” the FPM chief added.

“Israel -- which has never wanted anything good for Lebanon and is seeking to undermine stability – once handles Geagea directly, like in the days of war, and another indirectly, like today, through its regional allies, who are giving him the money and handling him,” Bassil went on to say.

Bassil: Those who vote for LF would be voting for Daesh and Israel

Strange, were the LF allied with Israel and Daesh when you reached an understanding with them to vote Aoun for president?

This has got to be the the best political joke ever.

I sounds of desperation. What apathetic campaign fear mongering. Rather than offer your constituents, economic plans, security, jobs, healthcare plans, he resorts to what third world maniacal dictators do best. Joesph Geobbles would be proud.

Who offered to relocate the daesh with AC equipped busses and take away food from the Gondole? Was is the LF or Hizballah?

those who vote for you are voting for Iran and its terrorists airlines...

They claim that Hizb won the 2006 war....that's a very funny joke. Compare Lebanon and Israel GDP since then...theirs shot up to +330BN per year and we shrank to 12-18BN. War by definition is fighting over resources...what have we gained from Hizb except destruction, poverty, and isolation?
LF are the only party able to balance the situation and bring Lebanon back to it's natural and prosperous Arab environment. We need big men, men with vision and clarity not midgets who in one minute support peace with Israel and in another they attack their fellow country men and accuse them of collaborating with it. Lebanon is fed up with midgets who sell everything including their mothers just to fill their pockets. In hours you will understand that the Lebanese people made their choice.