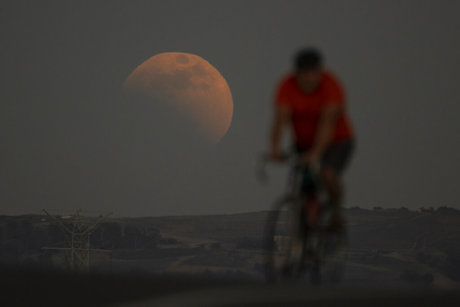 A total lunar eclipse provided a spectacular celestial show as it unfolded Sunday night into early Monday in the Americas.

The eastern half of North America and all of Central and South America were prime locations to see the eclipse, while partial stages were visible across Africa, Europe and the Middle East.

Among those watching the eclipse where skies were clear were residents of Buenos Aires, Argentina, who bundled up in the chilly night and relaxed on blankets in a park to look at the event. In Caracas, Venezuela, some people brought laser pointers as a crowd gathered to watch.

The moon was bathed in the reflected red and orange hues of Earth's sunsets and sunrises for about 1 1/2 hours, one of the longest totalities of the decade. It was the first so-called "blood moon" in a year.

A total eclipse occurs when Earth passes directly between the moon and the sun, and casts a shadow on the lunar surface. The moon was 225,000 miles (362,000 kilometers) away at the peak of the eclipse -- around midnight on the U.S. East Coast.

There'll be another lengthy total lunar eclipse in November, with Africa and Europe being the best places to see it, but not the Americas. Then the next one isn't until 2025.