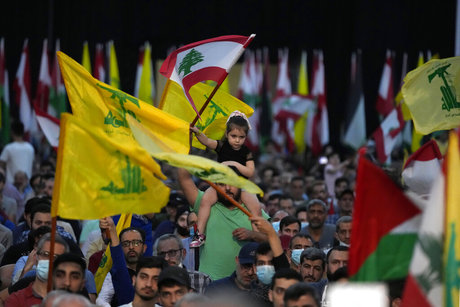 The main issue that would polarize the new parliament elected on Sunday is Hizbullah's right to keep an arsenal that is described as equivalent to or better than the state's.

Some see it as a historical right and the best defense for the small Mediterranean country while others consider Hizbullah's weapons to be the root of all of Lebanon's ills.

“They forgot the political system, economic system, corruption, the war in Syria and its effects on Lebanon and they forgot the American sanctions,” Hibullah's MP Hussein Haj Hassan said.

Sami Nader, an analyst with the Levant Institute for Strategic Affairs, said that Hizbullah had suffered symbolic losses but was skeptical the polls could yield radical changes.

"Hizbullah and the Iranian axis took a blow but will this pave way for change in Lebanon? I have doubts," he told AFP.

The formation of a government, the election of parliament's speaker and the presidential election could all be very contentious and lead to protracted political crises.

Speaker Nabih Berri has held his job since 1992.

President Michel Aoun, the world's third oldest head of state, had long planned for his son-in-law Jebran Bassil to take over but the Lebanese Forces' surge in the polls could disrupt that scenario.

Disarming Hizbullah has dominated political campaigns among almost all of the group’s opponents, while Hizbullah supporters consider the group defended Lebanon against Israel and against attacks by the Islamic State group and al-Qaida-linked militants over the years.

“Personally, I am not optimistic about these elections, and I do not think that the U.S. administration should bet on these elections,” said former U.S. Assistant Secretary of State for Near Eastern Affairs David Schenker last week, in a webinar for the Washington Institute.

Any government who pretend sovereignty but compromise on leaving even one Iranian rocket on Lebanese soil is playing Russian Roulette with Lebanon’s independence and the future of our children. There will be no investment, economic recovery, end of isolation, international respect, reform and resolutions with the World Bank with arms still on the table. What systematically destroyed Lebanese economy and our banking system are the skyrocketing interest rates due to political instability and Hizbollah occupation of state institutions via its useful idiots. Even now two-thrid of Bassil’s MPs are elected by Hizb or because opposition did not unite. A defense strategy is B.S. We need an end to armed Iranian militia for Lebanon recovery and rebuilding trust in a basij-occupied country.

I am so sick of hearing of Hisboz arms this Hizbos arms that. No one is taking away their weapons, because their weapons are supplied, monitored and used under the guidance of Iranian Revolutionary Guards.

I have been saying forever, in order to get rid of them you have got to cut the head of the snake. That head is in Tehran, not Dahyieh.

So the powers that be better get on it. As much as Donald Trump was hated, he had the mullahs on their knees with sever economic sanctions.

It makes no difference.

The weapon that AFP, AP, and Naharnet is referring to is majority rule, since Noam Chomsky says a majority of Lebanese are Shia. No census since 1934. Article 24 of the Lebanese Constitution gives half of Parliament to Christians (Taef Accord) replacing 6:5 advantage (National Pact). Why doesn't Hizbullah call for majority rule in Lebanon?

Maybe it's because Hizbullah and most Lebanese know something you and the senile idiot Chomsky don't. Shias are only 30% of the population ya moron! Instead of insisting on continuing to be the ignorant imbecile that we all know and love, go have a look at the voters registrations numbers, which is roughly all Lebanese aged 21 and over. You can actually go all the way back to the 2005 elections and all subsequent elections since. What am I saying, asking the self styled genius and legend in his own mind SSG Chris Rushlau, to for once, think for himself would be an unprecedented stretch, so you guys will have to endure his idiocies as we do state side.

Even other American CIA estimates the Shia population to be 40%. Even if it is 30% do you call that a small percentage? It is a third of this whole country.

Mystic stick to what you know: vandalizing, producing and distributing all kinds of illicit drugs, smuggling, mob beating up anyone how disagrees with you, etc.