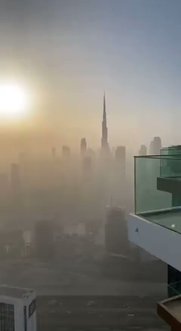 The world's tallest building disappeared behind a grey layer of dust on Wednesday as sandstorms that have swept the Middle East hit the United Arab Emirates, prompting weather and traffic warnings.

The 828-meter (2,716 ft, 6ins) Burj Khalifa, which towers over Dubai and is usually visible across the busy financial hub, retreated behind a curtain of airborne dirt that shrouded much of the country.

The UAE is just the latest country in the path of sandstorms that have smothered Iraq, Kuwait, Saudi Arabia, Iran and others in recent days, closing airports and schools and sending thousands to hospital with breathing problems.

The Middle East's sandstorms are becoming more frequent and intense, a trend associated with overgrazing and deforestation, overuse of river water and more dams.

"Abu Dhabi Police urges drivers to be cautious due to low visibility during high winds and dust," the police force tweeted, as residents took to social media to publish photos and videos.

"Please do not be distracted by taking any videos or using your phone," it added.

A National Center for Meteorology graphic showed nearly all the country covered by the storm, with the warning: "Be on the alert: hazardous weather events are expected."

However, a Dubai airports spokesman said there was no impact on air traffic. Weather conditions were expected to remain the same for the next few days.

In neighboring Saudi Arabia, badly hit on Tuesday, conditions eased in the capital Riyadh on Wednesday but continued to restrict visibility in the city center.

Emergency rooms in Riyadh hospitals received some 1,285 people suffering from respiratory problems over 24 hours from the sandstorm, the state-run Al-Ekhbariya channel reported late on Tuesday.

The Saudi national weather center reported that dust was also affecting visibility in the west and south, specifically in Assir, Najran, Hael and Medina provinces. Medina is home to Medina city, the second-holiest city in Islam.

The center predicted another sandstorm would arrive in the kingdom by Sunday.