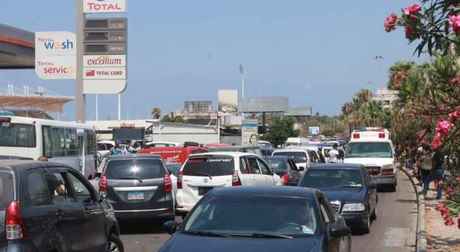 Lebanon was witnessing a host of renewed crises on Wednesday against the backdrop of a continuous surge of the dollar exchange rate on the black market.

“The flour crisis will grow and we will witness more queues outside bakeries,” Ali Ibrahim, the head of the Syndicate of Bakery Owners in Lebanon, told al-Jadeed TV, amid a shortage of Arabic bread in the market.

Antoine Seif, the head of the Syndicate of Bakery Owners in Mount Lebanon, meanwhile said that “bakeries do not possess a large quantity of flour and the available quantities are only sufficient for a few days, based on the size and consumption level of each bakery.”

“We are in a crisis and six mills have stopped operating due to the failure to pay for wheat at the silos,” Seif added.

“I will not accept that subsidization be lifted off bread in an arbitrary manner… In the (Cabinet) session of Friday, I will ask the Finance Ministry to pay for the (wheat) ships,” Salam added, noting that a line of credit of $21 million is needed to subsidize the quantity of wheat.

He also warned that measures will be taken against “mills that might monopolize the subsidized flour.”

Separately, the secretary of the gas distributors syndicate, Jean Hatem, said “there is no (cooking) gas crisis,” adding that “the quantities are available but the problem lies in the dollar” exchange rate surge.

“Some companies delivered around 10% of the gas yesterday, but supply completely stopped today, and Energy Minister Walid Fayyad has promised us to issue a rate list today so that gas can be delivered again to the market,” Hatem added, noting that distributors have asked for a dollarization of the rates.

Some fuel stations meanwhile ran out of gasoline and long queues returned in some areas, especially in the southern city of Sidon.

“Gasoline is available in the depots of the companies and in ships present at sea. We are not in a fuel crisis in Lebanon, because the issue is related to some delay in the completion of bank transactions aimed at providing the importing companies with dollars through the Sayrafa platform,” a top member of the fuel station owners syndicate of Lebanon, George Brax, told MTV.

“The issue should be solved quickly… Companies are distributing gasoline in limited quantities and some stations ran out due to the delay in gasoline deliveries,” Brax added.

Separately, sources at the Deir Amar and al-Zahrani power plants told al-Markazia news agency that the two plants have been shut down due to a lack of diesel.

“No ships are coming in the foreseeable future, which means that Lebanon will be plunged into total darkness,” the sources added.