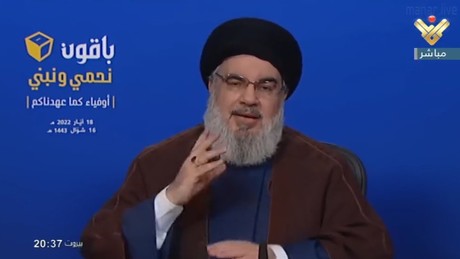 Hizbullah chief Sayyed Hassan Nasrallah announced Wednesday that the fact that the parliamentary elections did not produce a clear parliamentary majority might be a good thing for the country in the wake of the polarization that accompanied the electoral campaigns.

“No political camp in the country can claim to have the parliamentary majority. We are rather before political blocs and independents and the interest of Lebanon and the Lebanese people might be in what happened,” Nasrallah said in a televised address over the elections outcome.

“The size of the financial, monetary, economic and social crises present in the country does not allow any one camp to address them on its own, even if it wins the majority, and when no one has the majority this means that everyone is responsible,” Nasrallah explained.

“It is not true that the majority has shifted from one place to another,” Hizbullah’s leader added.’

Addressing rivals, he said bickering “will not lead to a result except for stoking tensions in the country.”

“It won’t contribute to addressing the current situations. What’s needed is for the country to calm down and to give priority to the files that were present before the elections, which are the subject of people’s pain. This can only be addressed through partnership and cooperation regardless of rivalry,” Nasrallah said.

Addressing supporters, Nasrallah stated: “The big results give strong messages about clinging to the resistance, the golden equation, the just and capable state, reforms, civil peace, coexistence and the priority of addressing social and economic crises.”

“You have provided the needed safety net for the resistance and its arms in the face of the declared campaign,” he said.

“You achieved a very big victory and we must be proud of it in light of the battle's circumstances,” Nasrallah added, pointing out that “the resistance and its allies have a strong and big presence in the new parliament.”

Separately, Nasrallah called on supporters not to stage motorbike rallies after his speech, especially in areas where they might “provoke” residents who have other political orientations.

“We want calm and stability and we don't want provocations,” Nasrallah said.

Commenting on the celebratory gunfire that accompanied the announcements of the elections’ results, Nasrallah reiterated that “any Hizbullah member who shoots in the air will be expelled” from the party, adding that “shooting in the air is haram (forbidden in Islam).”

Nasrallah also said that Hizbullah and the Amal Movement have told their supporters that the "Shia, Shia, Shia" slogan is inappropriate and sectarian.

Im staying indoors, expecting celebratory gunfire...after all, its a divinne victory, isnt it?

Where is the honour in assasinations of politicians, hiding explosives in densely populated civilian areas and drug smugling. Honour would be to lay down its arms and integrate into the Lebanese Army, and to continue working for shia rights in a peaceful manner.

The Majority of the people said we only want one army, the Lebanese Army. No more militias

He must really be hurt after his series of fiery speeches calling anyone who voted against the 'resistance' a zionist, and he lost allies in his own district.

Nasrallah: We have told our supporters that the "Shia, Shia, Shia" slogan is inappropriate.

Finally, he admits those thugs roaming the streets on bikes and those who invaded Ain Al Remaneih belong to his terror party.