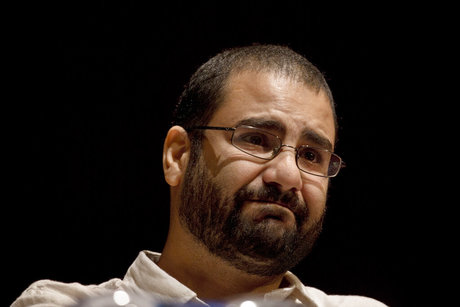 Egyptian authorities have transferred a prominent political activist from a maximum-security prison where he was allegedly tortured and denied basic rights to a new correctional facility, his family said.

Alaa Abel-Fattah was transferred from Cairo's Tora prison complex to Wadi El-Natrun prison in the north of the country, where he was visited on Thursday by his family, his sister Mona Seif wrote on Twitter.

"We're really glad that Alaa Abd El Fattah has been removed from the 'guardianship' of officers who bore him a personal hatred. We're relieved that he is is in a place which has some medical facilities," his aunt, award-winning novelist Ahdaf Soueif wrote on her Facebook page.

Abdel-Fattah has been constantly denied access to books, exercise time outside his cell, regular visits, and proper medical care, according to his family. He had previously filed several complaints documenting his mistreatment and alleging that he was beaten and humiliated by some prison officers.

Earlier this month, hundreds of Egyptian women filed a petition entitled "A Mothers' Plea" with the state-appointed National Council for Human RightsHe has , demanding the release of the 40-year-old programmer. In response, Moushira Khattab, NCHR president announced that authorities agreed to transfer him to the newly-erected Wadi El-Naturn prison complex, where she said, human rights standards are met.

Abel-Fattah is an outspoken dissident who rose to prominence during the 2011 pro-democracy uprisings that swept the Middle East and in Egypt, toppling long-time President Hosni Mubarak. The activist spent most of the past decade behind bars, and his detention has become a symbol of Egypt's return to autocratic rule.

Last month, Abdel-Fattah's family said that he had gained British citizenship through his mother, Laila Soueif, a math professor at Cairo University who was born in London. The family said they sought a British passport for Abdel-Fattah as a way out of his "impossible ordeal."

Abdel-Fattah arrived on Wednesday morning in his new prison, which is located in a desert valley 150 kilometers north of Cairo, said his sister. She added that he is being held in a big cell with three other prisoners, and is allowed to sleep on a mattress for for the first time in years.

The government of President Abdel Fattah el-Sissi, a U.S. ally with deep economic ties to European countries, has been relentlessly silencing dissenters and clamping down on independent organizations for years with arrests and restrictions. Many of the top activists involved in the 2011 uprising are now in prison, most under a draconian law passed in 2013 effectively banning all street protests.

"We do not know if this means an improvement in conditions," his sister said in a video posted earlier on Facebook. "The problem with the prison where Alaa was is not just that it is maximum-security prison, it is that the ministry of interior and state security and Egyptian authorities were actively depriving him of every facility and every right that should be easily provided in the prison."

Seif said that her brother will continue with his hunger strike until "an independent judge" reviews his complaints about imprisonment conditions.

Abdel-Fattah was first sentenced in 2014 after being convicted of taking part in an unauthorized protest and allegedly assaulting a police officer. He was released in 2019 after serving a five-year term but was rearrested later that year in a crackdown that followed rare anti-government protests.

In December, he was sentenced to five years in prison after being convicted of spreading false news. Abdel-Fattah separately faces charges of misusing social medial and joining a terrorist group — a reference to the banned Muslim Brotherhood, which authorities declared a terrorist organization in 2013.