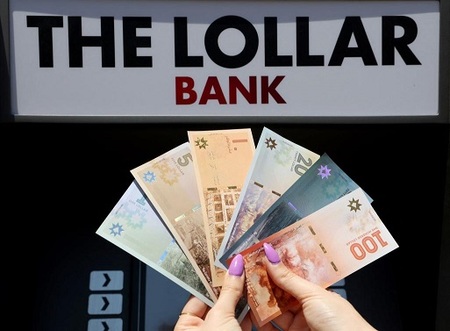 From life imitating art to the wrath of Indian gods... Your weekly roundup of offbeat stories from around the world.

An American writer who penned a piece called "How To Murder Your Husband" is on trial for... murdering her husband.

Novelist Nancy Crampton Brophy, whose "Wrong Never Felt So Right" books include "The Wrong Husband", is accused of killing her husband Daniel with a gun whose now-missing barrel she bought on eBay.

Police say the 71-year-old struggled to pay her mortgage but kept up 10 separate life assurance policies on her husband.

But Crampton Brophy from Portland has been picking holes in the prosecution case, saying, "I think you need to work harder on this story, you have a big hole in it."

CCTV cameras caught her close to the murder scene, but the writer said she may have been driving around to get inspiration.

Lebanon is on its knees, but its people have not lost their sense of humor despite the collapse of their economy. Instead they have been rolling out fake banknotes lampooning the corrupt political class blamed for wrecking the country.

The notes are called "lollars", the wry nickname for dollars citizens can only withdraw from their frozen accounts in Lebanese pounds at a fraction of their real value.

The funny money features some of the calamities that have befallen the country including the Beirut port explosion.

The Lebanese Transparency Association even set up a fake ATM in one of Beirut's main squares, declaring, "We will not adapt to this mockery anymore."

It's enough to drive you to drink. Even the Pope, who has been demanding tequila from Mexican priests. "You know what I need for my leg?" said 85-year-old Francis, whose painful knee has forced him to use a wheelchair. "A little tequila!"

And the Finns cannot get enough of a new beer celebrating their bid to join NATO.

Brewer Petteri Vanttinen said the ale tastes of "security, with a hint of freedom". Let's hope there's no bitter aftertaste given that neighboring Russia has the irksome historical habit of periodically swallowing Finland up.

Woe betide the gang of Indian thieves who have been haunted by nightmares since they stole idols from a Hindu temple.

Wracked by demonic dreams, they returned 14, along with a note begging forgiveness in Chitrakoot in Uttar Pradesh.

"We have not been able to sleep, eat and live peacefully," they wrote in their "confession letter", police inspector Rajiv Singh told AFP.

"We are fed up with the scary dreams and are returning your valuables."

They have reason to be afraid. The temple is dedicated to Lord Balaji -- an incarnation of the god Vishnu, who Hindus believe can destroy even "infinity and the omniverse" if provoked.

Rob Greenfield is proud of his rubbish fashion sense. The green campaigner has been walking around Los Angeles in a special suit containing all the trash he has produced in the last month.

When AFP caught up with him in swanky Beverly Hills, he was wearing 28 kilos (62 pounds) of wrappers and cans just from the drinks and meals he had consumed.

Greenfield, who previously lived for a year only on food he grew himself, said the plastic pollution message was getting through, though a lot of people assumed he was "homeless or that I have a mental health issue."

No Rob, it's the world that's mad.