Mbappe could play last game for PSG, 2nd place up for grabs 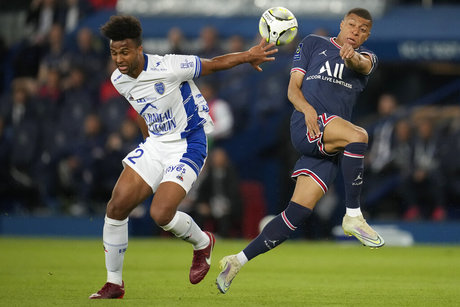 Kylian Mbappe may play his last game for Paris Saint-Germain when the French league season ends on Saturday.

The champions will host struggling Metz with Mbappe looking to add to his league-leading 25 goals and his overall tally of 168 since joining PSG from Monaco five years ago for 180 million euros ($190 million).

Mbappe has yet to reveal what he will be doing when his contract ends next month, with reports linking him to a move to Champions League finalist Real Madrid.

PSG turned down the same amount they signed him for when Madrid tried to buy him during the past offseason. Now the Spanish club could get him for nothing.

When Mbappe won the league's best player award for the third time last Sunday, he said his mind is pretty much made up but didn't say which way.

While PSG fans will be holding their collective breath, nerves will be jangling elsewhere on Saturday.

The race for second place between Monaco and Marseille is going to the wire, with the teams level on points. The relegation battle is also close with storied clubs Bordeaux and Saint-Etienne in deep trouble.

Monaco is in second place, which secures automatic entry into next season's Champions League. The team leads third-place Marseille on goal difference with a difficult match coming up at Lens.

Third place earns entry into the qualifying rounds of the Champions League. Marseille hosts a Strasbourg team looking to overtake Rennes in fourth place to gain automatic entry into the Europa League.

Rennes is two points ahead of Strasbourg and travels to play Lille, last season's champion. A draw will likely be enough for Rennes given its sizeable goal difference advantage over Strasbourg.

Six-time champion Bordeaux is in last place ahead of the visit of Brest. The team is three points behind both 19th-place Saint-Etienne and 18th-place Metz, which is in the relegation-playoff position.

Saint-Etienne has a tough match at French Cup champion Nantes.

Only goal difference stopped Bordeaux from being relegated last weekend, when the club's angry Ultras tried to corner the team bus as it arrived. Fans then pelted the field with toilet paper and held up signs with expletives after the final whistle.

Bordeaux has conceded a league-high 89 goals and captain Josuha Guilavogui said the players have failed the fans.

"I can't even go out and take a walk in the city. I feel ashamed," he said. "I must admit, there's been a blatant lack of professionalism."

Saint-Etienne is a record 10-time French champion, along with PSG and Marseille, but the trip to Nantes may end with relegation.

The mood among fans from the mining city is deeply despondent, and some of them are very angry. After last Saturday's loss at home, a group of Ultras waited outside to pelt the stadium with flares and clashed with riot police.

There is a chance for Saint-Etienne, though, because Metz faces PSG. If Metz loses, then Saint-Etienne needs only draw at Nantes in order to have a shot at staying up via the playoffs.