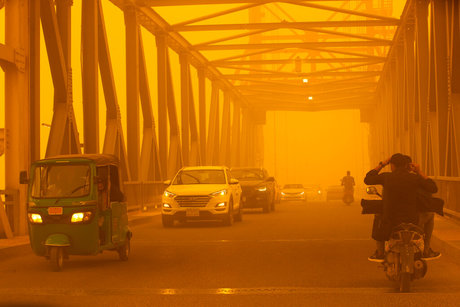 Iraq closed airports and public buildings on Monday as another sandstorm -- the ninth since mid-April -- hit the country, authorities said.

Prime Minister Mustafa al-Kadhemi ordered all work to cease temporarily in public institutions, with the exception of health facilities and security agencies.

He cited "poor climatic conditions and the arrival of violent sandstorms" in a statement issued by his office.

Iraq is ranked as one of the five most vulnerable nations to climate change and desertification.

The environment ministry has warned that over the next two decades, Iraq could endure an average of 272 days of sandstorms per year, rising to above 300 by 2050.

Air traffic was suspended Monday at international airports in Baghdad, Erbil and Najaf, according to statements issued by each airport.

The previous two sandstorms killed one person and sent nearly 10,000 people to hospital with respiratory problems.

The Middle East has always been battered by sandstorms, but they have become more frequent and intense in recent years.

The trend has been associated with rising water scarcity, overuse of river water, more dams, overgrazing and deforestation.

Oil-rich Iraq is known in Arabic as the land of the two rivers, in reference to the Tigris and Euphrates.

Iraq's environment ministry has said the weather phenomenon could be addressed by increasing vegetation cover and planting trees that act as windbreaks.