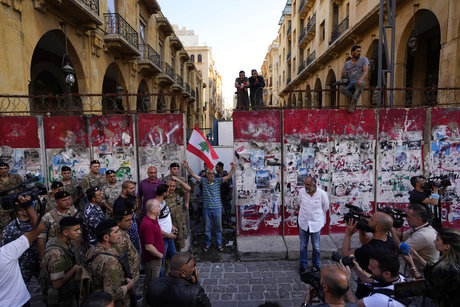 Interior Minister Bassam Mawlawi said Monday "this is Beirut's voice and the voice of the Lebanese" as a team of engineers removed cement blocks surrounding Parliament's building in Nejmeh Square.

Mawlawi added that Beirut's Central District is open to everyone, affirming that "Beirut will come back to life."

People gathered to watch the removal of the cement wall that stood for more than three years between the people and the Parliament.

Behind the cement blocs, there are metallic barricades that will also be removed.

"This is a victory for Oct. 17," an activist said as he celebrated the event. "Now the rebels are MPS in the Parliament."

The barricades had been set up following nationwide protests that erupted in late 2019 amid an economic meltdown to prevent protestors from entering Parliament.

After more than a dozen of Oct. 17 candidates won in the parliamentary elections, a post circulated on social media saying that the rebels have entered Parliament as MPs.