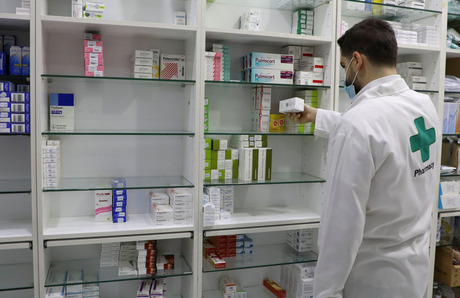 Pharmacists protested on Tuesday in front of the Ministry of Health as they urged authorities to issue a new pricelist for medicines.

Pharmacists slammed the smuggling of medicines that could be falsified. They said the citizens are forced to purchase these smuggled medicines as they are missing in pharmacies.

Pharmacies will be closed on Tuesday until p.m.

Meanwhile, the syndicates of doctors in Beirut and in the North, along with private hospitals also announced a general strike on Thursday and Friday, to protest "the Central Bank's policies against public depositors, doctors, health sector workers and hospitals."

Head of the private hospitals syndicate Suleiman Haroun said that hospitals are not allowed to receive the complete fees in-cash while they are obliged to secure cash money to cover their expenses.

"The Ministry of Health, the Social Security and others pay their bills through bank transfers, that hospitals cannot benefit from," Haroun said.

"Around 3,000 doctors and 3,000 nurses have left the country because of the banks unfair measures," said head of Doctors Syndicate Sharaf Bou Sharaf. He added that the banks are not accepting check payments, imposing unreasonable commissions and making the doctors' work difficult, pushing them to emigrate.

Doctors and hospitals on Thursday and Friday will only receive urgent cases and kidney dialysis patients.